Did the US occupation benefit Afghan women?

No. It’s a myth that the US invaded Afghanistan to “save” Afghan women from the oppression of the Taliban.

It’s true that the Taliban’s regime is brutal and won’t benefit women’s rights, but it was the US that funded the Taliban before 1996.

Women’s rights were only on the agenda when it suited the US’s invasion.

And the corrupt government regimes put in place by the US during the occupation saw war, poverty and starvation as the realities for women for two decades.

What does Afghan defeat mean for US imperialism?
Read More

Bombing and torturing Afghan people—and their families—didn’t benefit women. Saving women by killing them was the imperialists’ logic. An estimated 70 percent of casualties from airstrikes were women and children.

Liberals now say that all the gains made for women will be rolled back. Yet the gains they talk about are mired in corruption and lies.

One development programme the US created was Promote. It cost £306 million and was supposed to provide 75,000 Afghan women with training and jobs.

Yet when it was audited in 2016, it was impossible to trace where the money had gone. Women still had a lack of jobs and opportunities because little was being done to change their material lives and conditions.

And women still suffered corporal punishment or imprisonment for adultery under the latest government.

The women now left behind at Kabul airport are evidence of how little the West cares about their rights.

Wanting Muslim women to live in the image of certain types of Western feminism isn’t liberation.

Firstly, liberation cannot be given. It’s won by the oppressed for themselves. The only way to overthrow sexism and the system that creates it is by fighting from below.

Secondly, liberation doesn’t entail being told what to do by people who think they know better.

Some white Western women, from Hollywood actors to politicians, think they can tell Muslim women how to not be oppressed.

This allows the views of a better-off section of Western women to be mobilised for war.

US first lady Laura Bush argued in 2001 that the war was to “liberate Afghan women.” Cherie Blair repeated the same line in Britain.

And both spoke out against women wearing headscarves.

Their brand of feminism didn’t favour women making their own decisions.

This also plays into Islamophobic ideas that were used to justify the war in 2001—that all women in headscarves are oppressed by all Muslim men.

These arguments are now resurfacing.

But groups such as the Revolutionary Association of the Women of Afghanistan, founded in 1977, both denounced religious fundamentalism and the US attacks.

Yet some feminists are still arguing that intervention is the only way forward despite it being an intervention that led to the current horrors.

Airstrikes and occupations by Western militaries will not improve the status of women. It’s just an excuse to carry on imperialist intervention.

Who is to blame for the situation in Kabul?

Thousands of Afghans are rushing to Kabul airport to try to escape the country. Scenes of desperate people and women giving birth in planes are harrowing.

But the chaos and fear are another deadly result of Western intervention and their tight controls.

Evacuation must be completed by 31 August, when troops are supposed to leave.

The defeat of the West’s Afghanistan war
Read More

Crushes and gunfire exchanges have killed civilians and guards. Ordinary people desperate to flee are being pushed back out onto the streets unless they have the correct paperwork. Embassies are telling those with dual and British nationalities to head to the airport to try to catch a flight.

Those trying to get to the airport with documents to back their claim have to go through Taliban checkpoints to reach the airport first.

But many of these people also won’t make it past the Wests’s soldiers and onto a plane.

It means thousands of others who assisted foreign troops or are in fear for their lives under a Taliban regime will be left behind.

US soldiers screaming in faces and firing warning shots to keep people away from escaping are no better than the Taliban on the other side of the fence demanding order. Once more Western interference is to blame for the mixed messages and lack of regard for the lives of ordinary Afghans.

Who is involved in the protests against the Taliban?

There have been small anti-Taliban demonstrations in Asadabad, Jalalabad and Kandahar as well as Kabul.

Some of the protests have seen mostly young people demanding civil rights and women’s rights.

They have faced repression, although nothing on the scale of the last 20 years of occupation.

Other protests involved people from the minority Hazara group in the central mountain region of Afghanistan.

They are some of the poorest people in the country and are pushing for their rights.

But there is no doubt the US and its allies will be seeking to use any protests to undermine the Taliban and to create space for their old collaborators.

The flags of the Northern Alliance have been raised in the province of Panjshir for the first time in two decades.

The Northern Alliance was the key force the US used to carry out the defeat of the Taliban in 2001.

Alongside him is Ahmad Massoud, the son of the Northern Alliance’s former leader Ahmad Shah Massoud,

In the Washington Post, Massoud called for Western support to fight the Taliban. He has also made a particular push for French military support.

But the Northern Alliance is far weaker than it was in 2001. All the martial words may prove empty.

Should the British troops stay as long as possible?

Boris Johnson is pushing US president Joe Biden to extend the 31 August deadline for the US withdrawal from Afghanistan.

At the beginning of this week, there were 1,000 British troops in Kabul.

To think that US or British military force is ever an answer is to replay the mindset of the 20 years of the “war on terror”.

It began by cloaking the real motives of boosting profits and entrenching imperial power in the language of humanitarian intervention.

They said bombing, invasion and brutality would result in the invaders implementing generous reforms benefiting women and minorities.

Britain had bloody role in war on Afghanistan
Read More

Then emerged groups of former leftists who swallowed this mythology. They emerged first during the 1991 invasion of Iraq. Their numbers grew during the Balkan War in 1999.

Some also lined up behind the invasion of Afghanistan—and Iraq and Libya. Liberals and former left wingers provided a crucial shield for the imperialist ravages over decades.

But the promised transformations in people’s lives never came. Instead there was mass killings and torture. Even the vaunted suppression of terrorism failed.

Out of the wreckage of Iraq emerged Islamic State.

Instead of calling for troops to stay, we should demand freedom for all refugees to come to the country of their choice—and for Britain to welcome as many as want to come here.

And we should redouble our opposition to imperial war and military intervention. 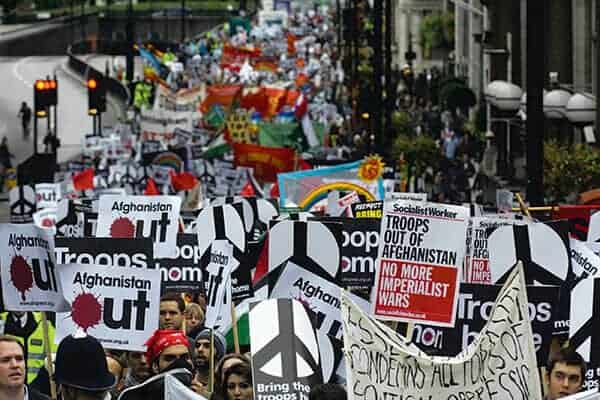 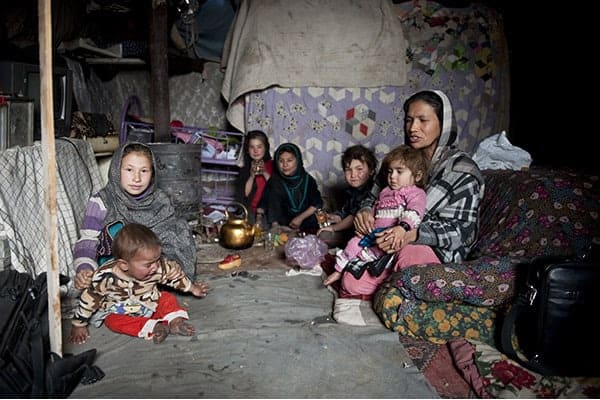 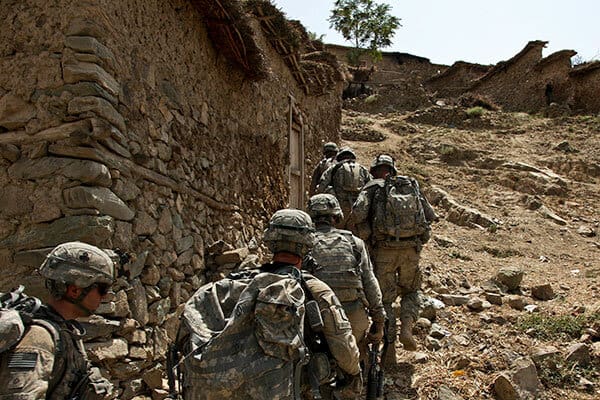