More than 100,000 protesters gathered in the Danish capital of Copenhagen last Saturday to demand that world leaders take serious action on climate change.

Demonstrators came together in Denmark to protest at the United Nations’ “Cop 15” climate summit (see box) – defying police attempts to crackdown on the movement.

The protest began last Saturday with “The Flood”, where “System change not climate change” was the main slogan.

The demonstration began in the main square in front of the Danish parliament.

It united NGOs, environmentalists, socialists, anarchists and other campaign groups.

A rally at the beginning of the march featured speakers from all over the world, including from the international peasant movement La Via Campesina.

Juana Ferrer had travelled to Copenhagen from a Via Campesina farm in the Dominican Republic.

She told Socialist Worker, “I have come here because I have hope for Barack Obama – he is different. But his policies are still quite unclear.

“He has to find a way to implement policies that will protect the poorest and most vulnerable, but that might come into conflict with international business. I hope he does the right thing.”

Many of those speaking at the rally and throughout the day voiced anger about the draft agreement leaked from the summit last week.

This looked set to punish poor countries while giving the rich world a license to pollute.

Anne Lange, from the Danish socialist group Internationale Socialister said, “The leaders of the world’s richest nations will look for any way to say ‘We don’t want to pay’.

“In this case it means they want the poorest to pay instead. I think capitalism as a system is to blame for climate change.

“But that’s not to say that we shouldn’t fight now. The Danish government should ban domestic flights, stop building new motorways and cut carbon emissions immediately.

“One of the best things about this movement is the unity between environmentalists, socialists and anarchists.”

And much like “The Wave” protest in London on 5 December, there were many student and university groups at “The Flood”.

Mathilda Brundin from Stockholm is a member of the Swedish Young Greens. She said, “I came here to show politicians that we care about our future.

“We need some type of Green New Deal.

“Carbon emissions should be cut by at least 30 percent in the next few years.”

The protesters marched six kilometres (four miles) from central Copenhagen to the Bella Centre, where the conference is being held.

But the Danish riot police managed to divert many of the protesters onto different roads.

There they “kettled” and arrested almost 1,000 people – 1 percent of all the protesters – under new “pre-emptive arrest” laws.

Many of those caught up in the mass arrests were not allowed medical attention. They were stopped from using toilet facilities as they were forced to sit in lines with their hands tied behind their backs.

A few were deported – but most of them were later released

But the police have not put the protesters off. There are more actions and protests planned until the conference ends on Friday.

Activists from Britain have travelled to Copenhagen on trains and coaches.

Tom Fitzpatrick, a student at Goldsmiths College in London, came on a coach organised by the Campaign Against Climate Change.

Tom said, “It’s been a totally enlightening experience – I’m so proud to be at the start of what has to be a mass movement to stop climate change.

“I really think people will ask us in 50 years time ‘were you at Copenhagen’ – and we’ll be able to say we were.”

Climate summit has no solutions 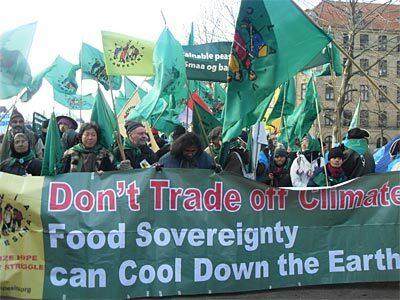