This article is over 9 years, 6 months old
Floods continue to hit Britain—while many people are still battling with the devastation they caused last month.
By Sadie Robinson
Downloading PDF. Please wait...
Tuesday 10 July 2012

Floods continue to hit Britain—while many people are still battling with the devastation they caused last month.

Kathryn Godfrey is a head teacher at Central Street primary school in Hebden Bridge in west Yorkshire. She told Socialist Worker, “Two feet of water flooded into the school two weeks ago. It’s had an impact on everybody.

“Some nursery and reception children have gone to a neighbouring school while the damage is repaired, which will take months.

“Lots of the children’s homes have flooded. When they see it raining heavily they start to worry. The playground is filling up as we speak. There’s nothing to stop a flood happening again.”

David Morcombe works at Hebden Bridge Trades Club. “I’m not overly impressed by Cameron,” he said. “I suspect the Tories have a list of places not to send him and Hebden Bridge will be near the top. The Tories are not popular here.”

Meanwhile insurers have said they won’t renew current insurance contracts beyond June 2013. They say they will continue to provide cover if the government improves flood defences. But the Tories have slashed them.

'We're standing up for refugees'

Mau Mau veteran speaks out: why Britain should pay 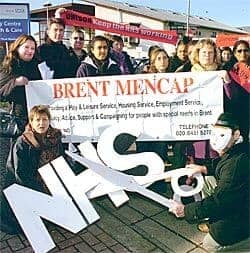