‘Flush job losses down the Tube’, say workers as they prepare strike

London’s Tube workers are set to strike next month against plans for 800 job cuts.

The London Underground workers, members of the RMT and TSSA transport unions, were meeting this week to finalise strike dates.

But there are strong indications the first walkout will be on Monday 6 September when parliament returns.

It comes after they voted three to one for strikes over the cuts to station staff. Some 76 percent voted yes in the RMT and 73 percent in the TSSA.

Now the unions are set to coordinate their action to push back Transport for London (TfL) bosses’ attacks.

And some activists are arguing to start the action straight after a strike by Alstom train maintenance and engineering workers on the Tube, who have also voted to strike.

This would be a powerful blow against the bosses that could shut the network. And the stakes are very high.

One tube activist told Socialist Worker, “This is a fundamental fight over people’s jobs, livelihoods and the right to work. Management are lying when they say there are no job losses just because no one is getting a P45.

“The loss of vacancies and positions are jobs losses. The bosses have threatened to withdraw the no compulsory redundancy agreements and this will have to be resisted.

“But defending jobs means we will also have to resist attempts to bring in voluntary redundancies in the future.”

RMT general secretary Bob Crow says, “RMT members have sent a clear message in this ballot that they will not sit by while the tracks are turned into a death trap and our Tube stations and platforms are left unstaffed.”

The fight against cuts is also a battle for passenger safety.

As RMT regional organiser Steve Hedley points out, “Passengers’ lives are being risked by cuts in train maintenance frequencies, plus track and signals maintenance cuts. The unions are warning that the 800 job cuts announced so far could be “the tip of the iceberg”.

One leaked document says TfL’s budget could be slashed by up to £1.2 billion in the cuts that will be announced on 20 October.

Bosses want to cut the workforce down to a skeleton crew, with rushed workers doing the jobs of those who have gone as well as their own.

TfL bosses claim that this round of cuts is essential to make £16 million “savings”.

Tube boss Peter Hendy, who gets £393,551 a year as Commissioner of Transport, says, “If you want to read a lot of good novels, the best place to do that is as a booking clerk in a suburban Underground station.”

This is a ridiculous insult, and if ticket sales are falling it’s because bosses have deliberately driven ticket purchases out of stations and into the hands of private contractors—who then charge a commission.

And station staff do much more than just sell tickets. They perform vital duties like assisting passengers, equipment checks and station inspections.

Some workers help drivers by signalling when it is safe to close the doors and leave the station.

The RMT has tabled its own alternative proposals: no job cuts, a maximum wage to curb bosses’ fatcat pay, ending commission to the ticket-selling privateers, and opening the books.

Bosses claim in response that only “positions” and vacancies are being cut, not actual jobs, as existing workers are being “reorganised” to fill the gaps.

But not hiring people clearly means there will be fewer workers—and over time, many fewer.

Rank and file union activists on the Tube are calling for workers not to cooperate with the changes or help managers work around the damage they are causing, for example by insisting on full lunch breaks and refusing to work overtime.

Such action can maintain the momentum between strikes. The strikes must be escalated unless bosses back off.

Hard-hitting strike action by this powerful group of workers would deal the government’s cuts agenda a serious blow.

Activists are also arguing for solidarity with London firefighters’ industrial action—and for no trains unless there is fully safe fire cover.

It’s vital that every trade unionist gets behind the Tube workers’ fight.

When smoke detector systems failed at Euston station last month, there was only one thing standing between thousands of passengers and a serious threat to their lives—the vigilance of station staff.

Thanks to their experience and skill, they noticed a raging fire underneath an escalator—one that all the automated systems had failed to spot.

And they were able to evacuate the station safely before anyone got hurt.

The fire has close parallels with the King’s Cross disaster of 1987, in which 31 people died—just one stop up the line from Euston.

The workers who saved Euston are the very workers whose jobs are on the line. If TfL axes the 800 workers it wants to, who will be there to save you from a fire?

Deaths at work could be prevented 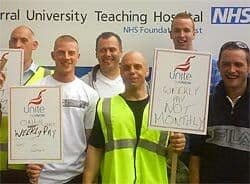