MPs called on Ford to honour its responsibilities to former Visteon workers in a debate in parliament last week.

The Visteon workers’ pension fund was hit when the firm went into administration in 2009— and Ford refused to honour its “lifetime protection” of their pensions.

Some workers have lost half the value of their pension. A court case over the issue is due to take place next year.

Workers held a rally outside parliament before the debate. Visteon workers at the firm’s Belfast, Basildon and Enfield, north London, occupied their plants when the firm went bust.

Their militant action forced Ford to pay out redundancy packages. More action can force it to pay decent pensions too. 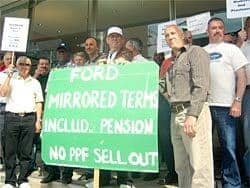 Ford-Visteon workers want their pensions back