Ford-Visteon struggle: ‘We won’t give up this vital fight for justice’

This article is over 12 years, 9 months old
Workers at the Ford Visteon car components plant in Enfield, north London, are continuing their campaign for jobs and justice despite ending their occupation of the site on Thursday of last week.
By Sadie Robinson
Downloading PDF. Please wait...
Tuesday 14 April 2009

Workers at the Ford Visteon car components plant in Enfield, north London, are continuing their campaign for jobs and justice despite ending their occupation of the site on Thursday of last week.

They are holding continuous pickets outside the plant to stop the KPMG administrator from removing any equipment or tools.

The workers occupied the plant for nine days after they were sacked with just minutes’ notice and no redundancy pay.

They ended the occupation on the advice of their Unite union officials, amid concern that they would face police action if they refused to leave.

Workers marched out of the plant to cheers and chanting from around 400 supporters – including delegations of RMT, Unison, CWU, UCU and NUT union members, and a contingent of about 50 students.

It took the workers some time to make their way down a spiral staircase and out of the building. The occupation began with around 70 workers – but had swelled to nearly 200 workers by the time it ended.

Kevin Nolan, the Unite union convenor at the plant, spoke to the crowd.

“I’d like to thank everyone for their support,” he said. “If Visteon thinks it can put 600 of us and our families into poverty, it’s got another think coming.

“Sometimes you have to stand up and say enough is enough. We won’t give up until we have justice.”

Workers decided to end their occupation after KPMG obtained a possession order for the plant in the High Court on Monday of last week.

If Unite had encouraged resistance and pledged to spread the solidarity, it is highly likely that the occupation would be continuing – and the workers would be in a stronger position.

Nonetheless people are determined to keep up the fight. “We’ll stay outside the gates until we get something,” said June Dunning, one of the occupying workers.

Linda Bartell agreed. “If we give up and walk away now, any package we get offered will be worthless,” she told Socialist Worker.

“They won’t be able to get the tools and equipment out because we’ll be outside. There is a stronghold of people who have been in here all week and they won’t give up.”

The battle by Visteon workers in Belfast, Basildon and Enfield has inspired other workers and transformed those involved.

The workers have been busy building support for their struggle among other groups of workers.

Others have leafleted football matches and shopping centres.

A group of women workers visited other workplaces on the industrial estate on Friday of last week and got workers to donate their pallets so that pickets could use them for firewood.

Others have addressed union meetings and conferences to win support. And groups have leafleted potential customers at Ford showrooms to dissuade them from buying the comany’s cars.

Visteon was part of Ford until 2000 and many workers are still on Ford contracts, which guarantee no compulsory redundancies and Ford terms and conditions for life.

Senior management from Visteon from the US were meeting with Unite officials as Socialist Worker went to press.

Workers hope that the Unite union can reach a deal that at least would honour their contracts and give guarantees about their pensions.

Their fight will be harder now that Enfield workers have ended their occupation. But it is by no means over. 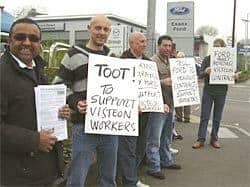 Basildon workers’ struggle is an inspiration to others

Ordinary people rally to back ongoing Visteon occupation in Belfast 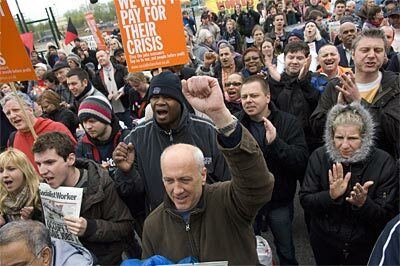