This article is over 15 years, 9 months old
After two and a half months of struggle the mass movement of students, high school students and workers has forced the French government to abandon its youth employment scheme (CPE).
By Nick Barrett
Downloading PDF. Please wait...
Saturday 15 April 2006

After two and a half months of struggle the mass movement of students, high school students and workers has forced the French government to abandon its youth employment scheme (CPE).

French prime minister Dominique de Villepin announced on Monday of this week the withdrawal of the scheme in what is a crushing defeat for the right.

The student organisations and the unions are the winners. This is a victory for mass mobilisation and grassroots organisation.

Despite the government’s attempts to divide and repress the mobilisation on the streets, the movement went from strength to strength.

The mobilisations widened the split between Villepin and home secretary Nicolas Sarkozy—rivals for next year’s presidential elections—with Sarkozy trying to put himself across as the politician ready to compromise.

Even former president Valery Giscard d’Estaing—architect of the liberal European constitution project defeated in last year’s referendum—called for the withdrawal of the scheme.

The bosses, faced with the student pickets of railways and roads and worried about the danger of the development of a mass strike movement among workers, pushed president Jaques Chirac and Villepin to back down.

A national student coordinating committee led the movement. It was built on a system of delegates elected university by university, school by school. It met every weekend to decide on the way to build the movement and carry it forward.

The CPE was a direct attack on workers’ basic rights. This meant the unions opposed it from the start.

Being able to sack someone without legal justification during a two year period was also a direct threat to the future trade union bases in the workplace. The government and Villepin’s refusal to negotiate meant that only the withdrawal of the CPE was acceptable.

A message from the French strike movement: ‘We have won and so can you’
Read More

The withdrawal of the CPE follows the referendum victory against the European constitution last year and has left the government groggy. For the next few months it is on thin ice, the slightest neo-liberal counter reform could spark off a reaction in one sector or another.

However, this is not the end of the story. The “equal opportunities law” scandalously remains. It legislates for apprentices to work at the age of 14, and for night work from the age of 15—a real return to the 19th century.

It also includes compulsory military service for young people identified as “repeated delinquents”. The small business version of the CPE, the CNE, which contains the same loophole that allows employers to sack workers without reason in businesses with less than 20 employees, is untouched. Villepin declared that he intends keeping these laws.

In reply, the student coordination has called for continuing the movement to obtain full satisfaction.

The CGT trade union leader, Bernard Thibault, has already announced that the battle against the CNE must start. He has fixed the traditional May Day demonstrations as the first major test.

FO, another union federation, has also warned that the CNE is unacceptable.

The main student union, UNEF, has called on students to continue the fight, and, although often outflanked on the ground by the coordinating committee, their spokesperson, Bruno Julliard, has become a national figure.

Other student organisations, under pressure with the approach of the end of year exams, have called on students to lift the pickets on the universities. But even after the government retreat, on Tuesday 30 out of 84 universities were still partially or totally blocked.

Crisis for the left and the right

The left has come out of the movement stronger, but most people in a Libération newspaper opinion poll don’t see much difference between the Socialist Party (SP) programme and the Tories.

The right are massively unpopular.

Both president Chirac and prime minister Villepin have only 25 percent approval ratings.

Discredited by their manoeuvres it is difficult to see any future for them, and Villepin may not last much longer as prime minister.

His right wing rival, Sarkozy comes out in a strong position, but among young people he is detested.

Sections of people are looking for a political alternative to neo-liberalism, and in the coming months there is a fantastic opportunity to see political debate developing in the universities.

The national caucus of the referendum committees next month could provide one focus for this.

There is a significant minority of young people, politicised by the movement, attracted by a mixture of radical, anarchist, and revolutionary ideas.

They are looking for an alternative to the system.

All of the left wing parties opposed the CPE and mobilised for the protests, but the 2007 presidential and general elections were never far away.

Thus, the main SP candidate, Ségolène Royal, known for her Blairite politics, was completely out of step with the movement.

The supposed synthesis between the different currents inside the SP is being put to a stern test, and a split is possible if Royal were to become its official candidate.

Despite this, it is likely that the SP will benefit largely from the movement.

Marie-George Buffet’s Communist Party adopted a harder stance but is caught between its traditional alliance with the Socialists and the hopes of its members and supporters who want radical change.

Without doubt, the political party which has best responded to the movement is the Ligue Communiste Révolutionnaire (LCR) whose spokesperson, Olivier Besancenot has gained enormously in popularity.

Polls put him ahead of the Communists in the presidential elections.

This is a nightmare for the CP leadership, but it will also put the LCR to the test.

Tens of thousands of young people have organised the biggest youth movement since 1968, so what the LCR does could now play a crucial role in the future of left politics.

There is a historic opportunity for the LCR to play a leading role in the emergence of a new left that opposes neo-liberalism which could act as a fighting pole of political attraction.

Not every worker struck this time round, but many did and the confidence coming from this first victory will be crucial in the future.

Villepin, Chirac and Sarkozy tried to say that it is the government who decides not the demonstrators.

We now know it is not true—united we can decide.

‘We defeated them in the streets’

Basile Pot, a signals worker at the Gare de L’Est in Paris, spoke to Christophe Chataigné about the impact of the movement’s victory against the CPE

‘We have to understand the victory against the CPE not as the end, but as the beginning. It opens a door that was shut since the defeat of the movement against pension reforms in 2003.

Now we’re getting our heads out of the water. It started with the victory of the no vote on the European constitution, which was also presented to us as something that couldn’t be avoided, that it was the way globalisation works and that no one could change that.

But the no vote showed that we could beat the powerful with the ballot box.

Now with the CPE we’ve shown that we can also defeat them in the steets.

When you look around the world, you can see that the same reforms are pushed everywhere. Germany is thinking about introducing a law similar to the CPE and you have the pension reforms in Britain and in Mexico.

I think that our victory will trouble the European ruling class.

The French ruling class was already worried after the no vote and is now even more worried with the CPE defeat.

But the victory over the CPE isn’t the end of neo?liberal reforms. What it has shown is that we can win when we have a significant movement—in the case of France, a movement that has united workers and students in a manner never seen before.

From this point of view, we’re not in May 1968 any more. The simple fact is that the majority of students also work while at university, so it makes the link with workers much easier.

The French governement is now paralysed until the next presidential elections. I can’t really see how it would have the guts to push through new job reforms or even privatisation schemes. The government now realises that people can react.

It is true that it took an enormous mobilisation—eight weeks of strikes in universities, general assemblies involving thousands of students, two general strikes as well as the first demonstrations against the CNE in October last year—just to get rid of the CPE.

But the degree of confrontation is so high that we needed this kind of response. It also means that we are now in a better situation to respond to other neo-liberal reforms.’ 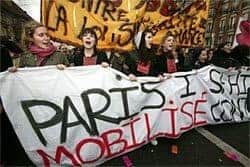