This article is over 15 years, 9 months old
Three million young people and workers demonstrated and struck across France on Tuesday of this week. It was a historic day of action and a magnificent display of solidarity against the government’s CPE labour laws.
By Jim Wolfreys in Paris
Downloading PDF. Please wait...
Saturday 01 April 2006

Three million young people and workers demonstrated and struck across France on Tuesday of this week. It was a historic day of action and a magnificent display of solidarity against the government’s CPE labour laws.

“Now it’s time for the street to speak,” was how one national newspaper had reacted to the standoff between the French government and the rest of the country over the CPE.

The street duly roared its anger through every major town and city in France.

People woke to find that there were no newspapers and that the radio was on strike, as workers responded to the students’ call to join them in their struggle against the government.

Schools, colleges and universities not yet affected by the occupation movement of recent weeks shut their doors.

Significant numbers of rail and Metro workers, bus drivers, post and telecom workers, airport staff and energy workers took part in the action. Many workers from the private sector also showed their solidarity with the students.

Nationally the protests were among the largest ever seen. Demonstrations were held in over 150 towns, with 250,000 marching in Marseille, 100,000 in Bordeaux, and up to 50,000 in Toulouse, Nantes and Rennes.

In Paris 700,000 people flooded through the city in the biggest anti-CPE protest yet.

University students, some over two months into their strike, were joined by the high school students who have given new impetus to the movement.

Striking workers, including impressive contingents from all the main trade union federations, took part in the march, along with thousands of young people who came into central Paris from the city’s impoverished suburbs.

Nicolas Sarkozy, the interior minister who spearheaded the crackdown on the uprising in France’s suburbs last November, claimed on Monday of last week that “gangs of troublemakers” were out to cause violence on the demonstrations.

On Tuesday witnesses reported scores of cases of police harrassing and arresting young people, especially black and Arab youth from the suburbs.

The heavy and intimidating presence of riot police at the end of the march eventually incited the response they had been looking for, leading to skirmishes as police used water cannon and tear gas on demonstrators.

The new CPE labour law allows employers to sack young people under the age of 26 without giving any reason up to two years into a job.

It is a recipe for low wages and insecure employment and has become a focal point for opposition not just to the government, but to the way that neo-liberalism introduces insecurity and fear into people’s everyday lives.

Polls last weekend showed that not only do 63 percent of the population oppose the government’s line on the CPE, but 50 percent have no faith in a market economy.

In Montreuil, eastern Paris, as in many other areas across France, students and teachers held a mass meeting in the morning before the demonstration, with trade union activists from local workplaces present as well.

Camille, a school student from Montreuil, told Socialist Worker, “The government wants to turn insecure working conditions into a right for employers.

“Here in Montreuil my school has been on strike for two weeks. Now all the schools from the area have begun meeting together in the town hall to discuss the action.”

François, a teacher and trade union activist, said, “There is a massive level of organisation among the youth. They’ve organised blockades in the schools and universities on a national scale and held mass meetings on an almost daily basis.

“In the workplace, activists have been able to win support for days of action like this – 80 percent of teachers in my school are on strike – but they are finding it harder to win everyone over to the idea of more prolonged strike action.”

Students are all too aware of the need to deepen their links with workers if they are going to defeat the CPE labour laws. “We can’t hold out indefinitely,” argued Elsa, a school student.

“We need workers to join us. If the government refuses to withdraw its proposals after this day of action, students and teachers need to hold meetings to discuss how to take things forward.”

In some schools teachers have already voted to hold another strike next Tuesday – and agreed in principle to go on strike indefinitely from then if the government doesn’t back down.

“This is a frontal attack on workers,” said Patrick, from the radical SUD union. “The government won’t give way easily. It’s trying to break our ability to fight.”

Everyone is aware of how this movement has now become one of the defining struggles of recent years.

“This is a turning point,” said Elsa. “In France we’ve seen endless days of action – a million people in the streets with no follow up.

“What we need now is effective strike action to make the government give in.”

But the students are optimistic and Tuesday’s huge demonstrations have given them a much needed shot of energy. “The movement is on an upward curve,” argued Yousef, a school student. “The balance of forces is with us.

“Everyone is affected by the CPE because it’s about what kind of society we want. They want to impose their vision on us, and they say we’re backward for wanting to oppose their model of society.

“But it’s not true. Look – if we’re in the street, it’s because we’re full of life and we’re powerful.”

Turmoil on the right

France’s right wing government, led by prime minister Dominique de Villepin, insists it will stand firm in the face of the extraordinary student-led protest movement against the CPE.

But behind this bluster lies an atmosphere of division and desperation. “Villepin is trying to act like Thatcher,” said an advisor to interior minister Nicolas Sarkozy last weekend. “But it’s not the right time and it’s not the right issue.”

Villepin has been forced to take an uncompromising position because of his rivalry with Sarkozy, who wants to break the cycle of partial victories and defeats that prevent the right from introducing a full programme of hardline neo?liberal reforms.

Behind this rivalry lies a wider confrontation over neo?liberalism itself. Over the past decade successive French governments have been confronted with movements of resistance against cuts and privatisation.

But neither side has yet been able to deliver a knock?out blow to the other.

At the same time Sarkozy is trying to use the police to split the movement, demanding that 4,000 riot police acted as stewards on Tuesday’s Paris demonstration – a request which the student coordination committee flatly turned down.

The right is worried that students and trade unions will capitalise on their ability to stage demonstrations and move on to build the united and militant action required to defeat the government.

“We have two weeks to hold out before the vacation,” was how one of Villepin’s advisers summed up the government’s siege mentality. 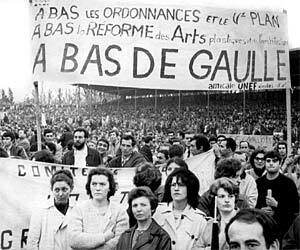 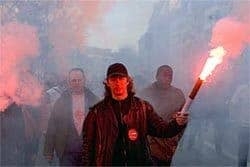 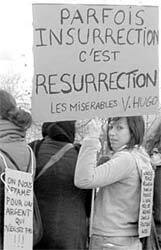