This article is over 9 years, 7 months old
Some 100,000 doctors in the British Medical Association (BMA) are set to join the pensions fight with industrial action on Thursday of this week.
By Julie Sherry
Downloading PDF. Please wait...
Tuesday 19 June 2012

Some 100,000 doctors in the British Medical Association (BMA) are set to join the pensions fight with industrial action on Thursday of this week.

The industrial action will see them postpone all non-urgent care. “We’ll provide emergency cover if needed—but on the day we’ll all down tools,” Lee Adams, a BMA member in north London, told Socialist Worker.

Mostly there won’t be picket lines. But there is deep seated anger among doctors at Tory austerity plans.

Gerard Reissmann, a BMA member and Newcastle GP, told Socialist Worker, “You would never expect an organisation like the BMA to take industrial action.

“But the government has managed to fire up even the doctors. The pensions fight has focused our anger.”

Doctors are furious that their pensions are under siege. After agreeing to pay in more to their scheme in 2008, their scheme is now in surplus.

David, a GP in Lancashire, summed up the mood “We see it as utterly unjust to attack our pensions now,” he told Socialist Worker.

Gerard added, “It’s not just about fighting for our own pensions—there’s a genuine solidarity felt for other workers.”

In Tower Hamlets, east London, BMA members plan a lunchtime rally at the Royal London Hospital to make sure their action is visible and connects with other workers.

“But doctors’ pensions are being raided. Public and private sector workers shoulder the risk and corporations get all the profit.”

One doctor working across the west of Scotland spoke out against the right wing press “diatribe” against doctors in the run-up to their action.

“We make difficult, complicated decisions on a daily basis which can mean life or death—and we take responsibility for those decisions.

“Our good pension deal was payback for all the hard work and long hours for those of us who chose to work for the NHS.”

The BMA national council meets next week to discuss the next steps in its fight over pensions. 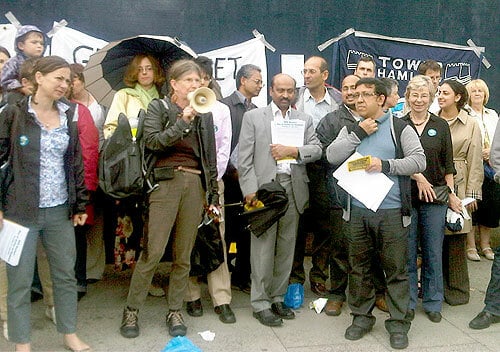 Action by doctors hits four out of five NHS employers