This article is over 15 years, 4 months old
Albert works with young people in south London and is a former activist with Panther UK. He spoke to Socialist Worker about how a generation of black leaders have been incorporated into the system
Downloading PDF. Please wait...
Saturday 24 February 2007

‘The situation that we face today isn’t really new. Today we have school exclusions, but in the 1970s we were fighting “special education” – a means of giving black kids an inferior schooling in separate schools.

Now we have Labour MP Diane Abbott taking her child out of the state sector because she can afford an escape route.

We have Lee Jasper, London mayor Ken Livingstone’s race adviser, backing up the police – despite the fact that the police continue to oppress black people.

And on top of that we have Trevor Phillips, head of the Commission for Racial Equality, making pronouncements that have been eagerly lapped up by racists.

These people all made their name attacking racism and demanding real equality. At one level or another, they all used to oppose capitalism.

But today they all seem to agree that being a small-time business person and getting rich should be the aspiration of young black people today.

Yet the gang culture that they hate so much is just another form of small business.

Gang businesses are illegal – their battles are fought in the streets, rather than in the privacy of the boardroom.

But the underlying processes of competition, exploitation and getting rich are exactly the same as with legal businesses.

I think we need to offer an alternative moral value system that has nothing to do with capitalism. We need leaders that can talk about a collective struggle against racism.

Today’s black leaders seem to have forgotten their history. They’ve forgotten about the riots in Brixton, in Toxteth, in Handsworth, in St Pauls.

They’ve forgotten about how we were demonised as violent thugs by the media.

That’s why I think we need a new generation of leaders – people who don’t accept the conservative family values nonsense that is being pushed, and who talk instead about the need to fight back against this racist society.’ 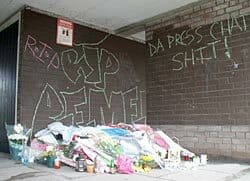 Inequality and poverty are the real causes of violence