More than two million people have walked out on strike in Greece – from a total workforce of five million. The 24 hour general strike unites both public and private sector workers against the government’s austerity measures.

All flights in and out of the country have been cancelled, and schools, council offices and ministries are closed. Few buses or trains are running, and those that are have mostly been approved by strikers to allow workers to join protests.

More than 30,000 people joined two separate marches. They shattered the unusual quiet in central Athens with angry chants as they marched on parliament. Workers are furious at the centre-left Pasok government which won last year’s general election after it promised not to freeze wages. Marchers shouted, ‘No sacrifices! Make the rich pay for the crisis!’

Yiannis Anastakis, who works at the Olympic Stadium, told me, “Before the election the government said completely different things. Now it wants to cut salaries, and they are already very low. Most people take home around 700 euros [£615] a month.

“The people who have money in Greece don’t pay taxes. But the government won’t take money from the rich—instead it looks to get more from the low paid.”

Post and telecoms workers, engineers, unemployed people, electricity workers, students, council workers and other marched together. A large group of African and Bangladeshi migrants joined the protest, demanding citizenship rights and an end to police harassment.

Police fired tear gas and batoned protesters around Syntagma Square, near the parliament buildings. A group of demonstrators flung red paint at the police squads. The police attack split the demonstration in two, but demonstrators defied the police and the march continued.

Public and private sector workers struck together against the government’s aim to make massive cuts that will severely hit workers’ living standards. The Greek government’s budget deficit currently stands at 12.7 percent of Greece’s annual gross domestic product. The government wants to slash it to 2.8 percent.

Early this morning, I joined a picket by trade unionists and students at the Metika metal company offices in Athens. Panos from the engineers’ union said, “The government says it is against the crisis, but in reality it is attacking the rights of working people.

“We are also here because Metika has fired three workers, who were active in the union, in its factory in Volos.”

Banners across the company’s gates read, “Stop the stability programme. Ban the sackings” and “No sacrifice for their profits.”

Yiannis said, “The EU complains that Greeks have a very good life in comparison with other countries. This is completely untrue. Many of us have to do two jobs to survive. Look at the people here. Tell me that they are all rich.”

The general strike is not the end of the fight in Greece. Different groups are planning their own strikes, while there are plans for more national days of action in the near future. 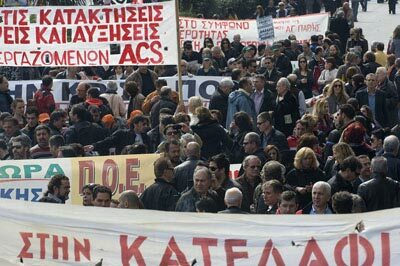 Pictures of the Greek general strike