This article is over 15 years, 10 months old
Trade unionists get a chance to make their points about pensions directly to government minister
Downloading PDF. Please wait...
Saturday 25 March 2006

It’s not often that trade unionists get a chance to make their points about pensions directly to government ministers. But it happened recently in Ashfield, Nottinghamshire.

Richard Buckwell, Ashfield Unison branch secretary, reports, “On Friday of last week Geoff Hoon, local MP and leader of the House of Commons, came to speak at a meeting of 100 Unison members at Ashfield district council, together with members from two police civilian branches and the Notts County Council Unison branch.

“We wanted to make clear to him why we are striking in defence of our pensions.

“His answers, which time and time again spoke of ‘indisputable facts’ and a refusal to admit there were alternatives to worsening pensions for local government employees, only served to anger union members.

“The one moment of instantaneous applause came when the government were slated by a member for all the billions spent on the war on Iraq which could have been used to provide decent pensions and welfare. 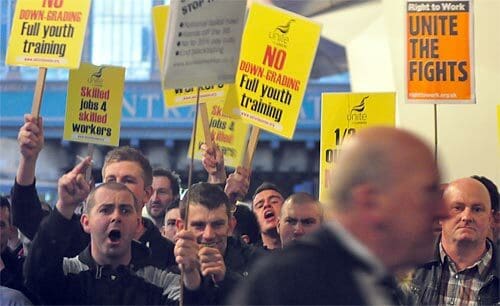