This article is over 16 years, 8 months old
Longstanding US activist Tom Hayden addressed the London rally last Saturday. Hayden was a prominent opponent of the Vietnam War and is now campaigning against the Iraq war. He spoke to Socialist Worker.
Downloading PDF. Please wait...
Saturday 01 October 2005

‘The movement in the US has grown tremendously.

When Cindy Sheehan went to Crawford, Texas, and camped outside president Bush’s ranch the media jumped. The president on vacation and the grieving mother outside — it was the perfect image.

At first there were three or four people, but by the end of the month there was a whole community. It was most unexpected.

Today most Americans are for immediate withdrawal from Iraq. At the time of the invasion a lot of people thought that the toppling of Saddam Hussein might be a good idea. Now they think that too many have died, too much money has been wasted. We have to make room for these people in our movement.

The military families have played an important role in the US. There is no capacity to mobilise any military families in favour of the war. They turned up for a few hours at camp Crawford, but they were badly organised and quickly disappeared. The situation is very different from during the Vietnam War in that respect.

Iraq is a quagmire. The war appears to be unwinnable. The size of the Washington march reflects the feeling that there’s something to march for — we’re on the up and Bush is on the down.

The leaderships of both parties in the US seem to think that we have to continue the war, for “strategic” reasons — oil, Israel and so on.

The position John Kerry took during the election campaign was untenable. No one really agreed with what he was saying, although the movement backed him because if he had won it would have been seen as a defeat for Bush.

The leaders of the Democratic Party seem to be worried about their image from the time of Vietnam. I’m worried about that too — but I see it as a pro-war image rather than an anti-war one.’ 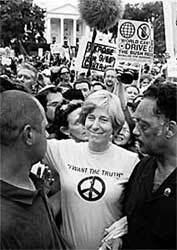 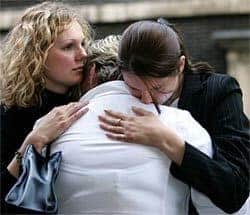