The capture by Iranian forces of 15 British sailors in the Gulf brought shrill, bellicose headlines last weekend and calls for retribution.

The anti-war movement has done a superb job in winning a clear majority against the war and occupation in Iraq.

But no one should believe that because the case against the “war on terror” is so overwhelming then no British government can garner support for another military misadventure.

The capture of the British sailors has all the hallmarks of the kind of incident that has been used in the past as a reason either for war or for escalating confrontation.

In 1949 the British gunboat HMS Amethyst was fired on in the Yangtze river in China. There was much outrage in Britain at Mao’s People’s Liberation Army, which was on the verge of taking power, for shooting at the ship. There was little questioning of what a British ship was doing on a Chinese river.

Whether or not the British sailors were in Iranian waters is disputed. But what is not in dispute is that Britain has joined the US in pouring warships into the Gulf while pressuring and threatening Iran.

Reliable US sources have reported that special forces are already operating in Iran.The Stop the War Coalition has rightly argued that the occupation of Iraq threatens to generate a wider regional war.

The commander of the ship HMS Cornwall unwittingly captured the mentality of imperial occupation when he said the sailors had been captured in “our waters”. He meant the waters belonging under international law and treaty to the Republic of Iraq.

In addition to the immediate argument that this incident is not worth yet more bloodshed and war, it is vital to challenge this imperialist delusion.

Part of that is simply asking the obvious question: imagine if Iran occupied France, had scores of warships in the Channel, was reported to have commandos operating in the home counties, and was pushing for sanctions against Britain – how would public opinion, the media and the British government react?

What makes anyone think Iran is any different?

Secondly, as propagandists try to gloss the “war on terror” in fake humanitarianism, more and more people need to shout out the single greatest lesson of the anti-war movement.

It is not the business of Western governments and the corporations that back them, steeped in the blood and sweat of hundreds of millions of people across the globe, to bring “order” to the “savages”.

It is the business of those of us who live in those imperialist states to do all in our power to stop their militarism and to act in solidarity with those around the globe fighting for a better world.

Everywhere you go this week, make sure people are asking: what on earth are British gunboats doing in Iraqi or Iranian waters in a place called the Arabian or Persian Gulf thousands of miles from home?

It is up to all of us to oppose the war drive against Iran. Can you start a discussion at work or college, arrange a Stop the War meeting, get a letter into your local paper, petition on the streets?

And as the People’s Assembly in London agreed last week, if there is an attack on Iran, we will need civil disobedience in every community, walkouts in every school, protests and strikes in every workplace.

If George Bush bombs Iran, we should bring this country to a standstill. 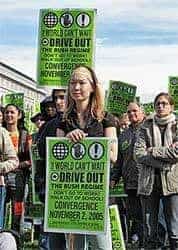 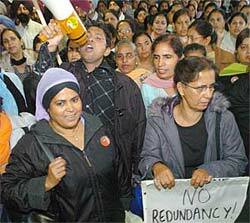 Massive climate ‘Wave’ protest turns up the heat on the government