This article is over 17 years, 0 months old
AS MANY as 19 Iraqi civilians were killed by US forces in just two incidents at the weekend. To the world’s media they remain nameless and faceless—another statistic in the mounting death toll of the occupation.
By Kevin Ovenden
Downloading PDF. Please wait...
Saturday 15 January 2005

AS MANY as 19 Iraqi civilians were killed by US forces in just two incidents at the weekend. To the world’s media they remain nameless and faceless—another statistic in the mounting death toll of the occupation.

They join the 100,000 Iraqis who have been killed since the invasion, according to an authoritative study last year in the Lancet medical journal. We do not know the true figure because the occupation authorities still refuse to count the number of Iraqi dead.

But even their reports show they are responsible for twice as many deaths as the Iraqi resistance and armed groups of all types combined. The US has just “loosened” its “rules of engagement”, to encourage troops to open fire more readily.

Ali Salman Ali, a 37 year old shopkeeper, described what that meant for a mentally disabled man who failed to heed commands from US troops recently: “The soldiers knew this guy and joked with him all the time. But on this day, they ordered him to stop and he didn’t. So they shot him dead.”

You can search in vain for condemnation by pro-war commentators of such murders. But they are quick to seize on other killings to try to justify the occupation.

Such was their response last week to the murder of Hadi Saleh, the international secretary of the Iraqi Federation of Trade Unions.

No one knows who killed him, but that did not stop pro-war propagandists using it to claim we must support the occupiers’ attempts to crush the popular resistance in Iraq.

In fact, as the campaigning group US Labor Against the War says, “The ultimate source of the violence in Iraq is the occupation.”

Far from bringing peace and staving off chaos, it is creating the conditions in which tens of thousands of people actively resist. It has also led to a general breakdown of order, in which ordinary Iraqis fear kidnap and attack by criminal gangs.

Saleh’s death is as much a consequence of the brutal occupation as the hundreds (including over 500 children) who were killed directly in the recent US assault on Fallujah.

The TUC in Britain has issued a statement condemning Saleh’s death. Ending the violence, all the violence, means acting on the policy passed unanimously by the TUC last September calling for an end to the occupation.

After the elections the US will still rule 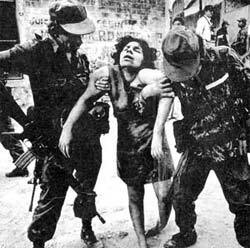