This article is over 13 years, 5 months old
Striking community service workers in Glasgow report that they are "still solid and still motivated" as they enter their ninth week on indefinite strike.
Downloading PDF. Please wait...
Tuesday 03 March 2009

Striking community service workers in Glasgow report that they are “still solid and still motivated” as they enter their ninth week on indefinite strike.

The 21 council workers are fighting an attempt to regrade them under the council’s single status review. The change would increase their working week while leaving several workers significantly worse off.

Striker Donald McNaughton told Socialist Worker, “It is a disgrace that the council won’t speak to us. They should realise that their workers are their greatest asset.”

Glasgow Unison is set to ballot its 10,000 members for strikes after the council broke a promise that no worker would lose pay through the single status review.

Donald said, “We hope our colleagues will show their support by voting for action.”

Strikers have been out collecting at Celtic football ground and have spoken alongside strikers from Waterford Crystal in Ireland. 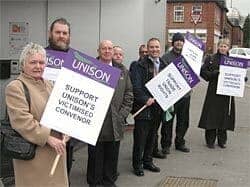