The dispute started over pay but the employers, SPT, are now looking for staff cuts and changes in working conditions.

The employers want to cut down on station staff and replace them with roving security staff. Staff in stations will not have breaks, except “subject to the exigencies of the service”. The security staff will be agency workers rather than permanent staff.

The employers are also pushing for staff to take their summer holidays in October.

Workers are angry about bosses’ claims that the subway is expensive to run. One picket at St Enoch subway station said, “SPT say it’s a high cost system but it’s not staff that get the money. In 15 years my annual salary has only gone up £75.”

Subway staff intend to strike on four days this week, including Sunday when a Celtic versus Rangers football match is scheduled.

This is an opportunity for subway workers to leaflet the football supporters and win the public to their cause. 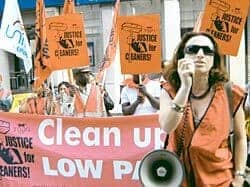