Striking workers at Tyneside Safety Glass marched through a industrial estate today, Friday. Some 112 Unite union members have been on strike for better pay on Monday of this week.

At first they offered nothing, then after negotiations offered a three year deal—but only if hours were increased. A subsequent offer was made at the last minute, which workers point out would have meant a pay cut in real terms.

Despite management protests that the price of glass and electricity had increased, the company still managed to pay £750,000 to the owner’s trust fund. The highest paid director got a 14 percent pay rise.

After a week of action, the lunchtime march was loud and lively. Strikers blew vuvuzelas to demonstrate their anger to other workers.

They marched from the toughened glass works to the bulletproof glassworks on the Team Valley Trading Estate—somewhere with a history of industrial action.

Local MPs Ian Mearns and Dave Anderson were among the supporters at the protest. Mearns pointed out that workers in have suffered a 7 percent reduction in pay in real terms over the last five years.

Talks are set to resume next week, and the glass workers expect Unite to endorse another two weeks of strikes. 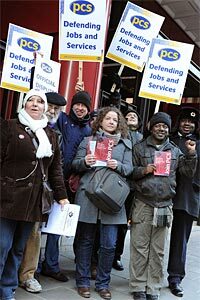 Wednesday 24 March: turn the budget day into a day of resistance