This article is over 17 years, 0 months old
An anti-war assembly in India was a step forward for the global movement, says Chris Nineham from the Stop the War Coalition
Downloading PDF. Please wait...
Saturday 08 January 2005

OVER 400 activists from around the world gathered for an anti-war assembly in Hyderabad, India, at the end of last year.

Their aims were to launch an anti-war network in India, discuss the next steps for the movement globally, and build action for 19 and 20 March.

The idea of the assembly came out of the World Social Forum in Mumbai, India, at the beginning of 2004.

The assembly had a big impact in the area. All the papers covered it—it was big news that Iraqis, Americans, Europeans and the Indian movement were coming together against George Bush.

The assembly ended with a 5,000-strong demonstration through the streets of Hyderabad chanting: “Down with Bush, down with Blair! Viva Palestina, viva Fallujah!”

People were delighted to see an international anti-Bush protest on their streets and many bystanders joined in. It ended with a rally addressed by international delegates and leading figures of the Indian left.

One student activist told me at the end of the rally: “We hope this is just the beginning. The left are talking to each other now and that is great. But people in India are crying out for action.”

Walden Bello, from radical NGO Focus on the Global South, told the assembly that the world was polarised by imperialism:
‘In America we face rule by a right wing with a very simplistic and dangerous ideology. The rest of the world is going in the other direction, and this is creating a series of crises for the US. The Atlantic alliance that won the Cold War is virtually dead.

Latin America is in political rebellion against neo-liberalism. In Asia the US is both overextended and losing control. The US is losing the “war on terror”.

Most important of all, US forces are being ground down in Iraq. The Iraqi resistance has started to change the balance of forces. A US official used the word “quagmire” to describe Iraq last week. The question is, what will the US do?

This is where the global movement comes in. We must help create the conditions in which the Iraqi people get sovereignty. We can all contribute to a defeat for the US in Iraq that will strike a blow for liberation everywhere.

We need protests with new tactics that close down our rulers’ operations. We need massive civil disobedience and the biggest possible mass demonstrations globally on 20 March.’

Sheikh Hassan Zarkani, an Iraqi representing radical Shia cleric Al-Sadr, spoke about the achievements of the Iraqi resistance:
‘The moment the invincible US army came to face the Iraqi people they failed. They are failing every day. They say they have reconquered Fallujah, but then the next day they say they cannot open up the city because there are “pockets of resistance”.

We shall continue our resistance by all means—peacefully and with weapons. And we try to do so together with our Sunni Muslim brothers. We wish to overcome the idea that this is a divided resistance. We are all part of an Iraqi resistance.

We are proud to be here with the anti-war movement. We have already ensured that the US will think long and hard before attacking another country.’

Joseph Gerson, from the US coalition United for Peace and Justice, described the domestic impact of Bush’s war:
‘In my opinion the US forces have already lost the war militarily. The question is, how will this play out?

There is now a major split in the Republican Party. The conservatives are fighting with the neocons. Republican senator John McCain has publicly called for defence secretary Donald Rumsfeld to go.

All the options are bleak for the hawks, but the way it plays out depends partly on us.

We suffered a defeat in the elections but the US is now more divided than at any time since the Civil War and there is more opposition to war among organised labour now than ever before.

Recent work by Military Families Speak Out and Iraq Veterans Against the War has been incredibly important.

It has opened a new and fast-growing front against Bush. The movement has drawn up a calendar of events to involve new people. It includes national days of outreach when we go to churches, union halls or just go door to door.

There will be massive civil disobedience on 20 January—the day of Bush’s inauguration and 20 March will be a day of national actions and demos in the big cities. We are aiming to take the movement to another level.’

Mamdouh Habashi, from the Cairo Conference Committee, reported on the developing movement in Egypt:
‘Organising in Egypt is very hard, but the war on Iraq is changing things and in many ways Egypt is a weak link in the chain of US domination.

In the last few weeks we had our first successful demonstration against President Mubarak’s government.

Islamists, nationalists and Marxists have cooperated for the first time to prepare the first two Cairo conferences to oppose US aggression.

Now we are organising a third Cairo conference—but in a new way. We want this year’s conference to be much bigger, but most importantly broader. We want it to involve artists, writers, intellectuals, trade unionists and so on, so that it will have serious weight in Egyptian society.

We are throwing a stone into the rotten water in which we all live in the Arab world.’

Meena Menon, one of the Indian organisers of the assembly, spoke of the impact she hoped it would have:
‘We need to take on imperialism globally because it shapes the world. The Indian government is using the rhetoric of the war on terror to justify increasing tension with Pakistan.

And they have been collaborating with Bush. We have been leaked an American document outlining plans for a string of new US bases in the area.

Our job now is to take our message to the people. We have organised a series of regional meetings to build up to demonstrations on 20 March, which we expect to be the biggest we have had by far.’

Rieko Asato, from the Japanese Council against Bombs, described how the Japanese government’s participation in the war on Iraq is creating a crisis:
‘The popularity of our government has reached an all time low since it became public that the troops for Fallujah were dispatched from the US base at Okinawa, Japan.

Now only 37 percent of Japanese people are backing the government.

The government has violated our constitution’s denial of militarism, and it is making people furious. We have to step up our resistance once again.

We will return to Japan and start preparing for 20 March—to make it a day that no government will forget.’

Make sure these are days to remember

AS PART of the international protests marking the second anniversary of the invasion of Iraq, the Stop the War Coalition has come together with CND and the Muslim Association of Britain (MAB) to organise a march through central London.

In the run-up to the demo there will be a “day of disobedience” across Britain on 15 February—two years to the day since two million marched in London to say no to the threatened invasion.

Activists are organising acts of civil disobedience around the country on this day.

Call us on 020 7278 6694 to let us know about action planned in your area, or e-mail [email protected]
Tracy Martin from Stop The War Coalition office

Stop the War meeting in Haringey 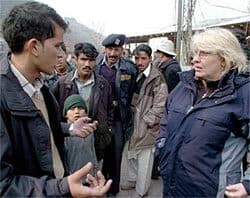