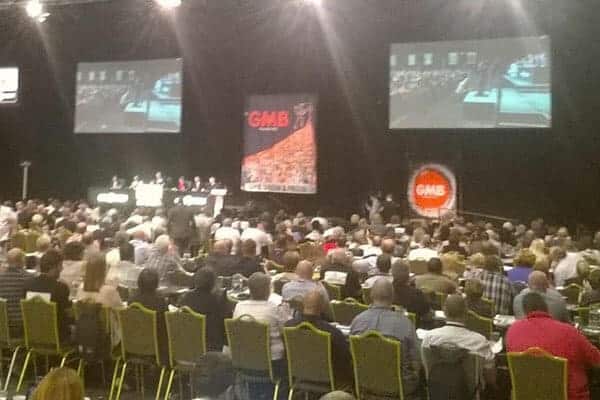 Delegates were furious with Labour’s capitulation to austerity and speakers calling on it to be more radical got loud applause.

GMB general secretary Paul Kenny told conference, “The ‘has-beens’ in the Labour Party are lecturing us that Labour was ‘too left wing’–and while they’re at it throw in a few attacks on the trade union.

“That is the essence of why millions of working people stopped voting Labour between 2010 and 2015.”

But the reality is millions of workers stopped voting Labour before 2010. The leadership argued to push forward with the GMB’s political strategy of getting union members selected as council and parliamentary candidates.

The newly elected Labour MP for East Leeds Richard Burgon is one such GMB member. In a fringe meeting on the unions and the 2020 general election campaign he encouraged delegates to sign up.

“You can either let Lord Mandelson decide or you can decide who the next leader of the Labour Party is,” he said.

But this wasn’t just the message from the top as most delegates see no alternative outside of  the Labour Party. Jennifer Smith from Wales and South West region said, “The reality is that Labour lost and lost badly – so we need to regroup and fight to make Labour stand up for working people.”

Delegates slammed the Tories’ attacks on trade unionists’ right to strike. Pat Duffy from Scotland said, “When I joined the union in the 1960s no one told me about the ‘right to strike’. I went on strike when I had cause to.”

The leadership strategy is to build up union strength in anticipation of the changes, but the real question is will the union fight instead of waiting until 2020?

The attacks can be beaten with real resistance. Delegate Scott Robertson told Socialist Worker, “We have to take on the attack on union ballots head on.

“I’ve stood on miners’ picket lines before – that’s where we’re heading again. Now there’s going to be a confrontation with the Tories and we need to fight.”

‘Stop jumping on the anti-immigration bandwagon’

The fight against the scapegoating of migrants and the racist Ukip party ran through discussions, with delegates condemning attempts to divide workers.

Steve Oaks said, “Migrants are blamed for the housing crisis, benefits and unemployment – and anything else that they can think of.

“The Tories, Ukip and Lib Dems all blamed migrants during the election. But what really saddened me,” he said said to applause, “was that Labour did as well with their mug promising to control immigration.”

Southampton bus driver Kevin Green told Socialist Worker, “Everyone’s jumping on the bandwagon that immigration is the root of all evil.

“I work with Polish bus drivers and they all come here to work.

“You go where the work is and hats off to them for coming here in the first place. There’s definitely double standards about it – it’s fine for people to go work abroad but not for people to come here.

“I think many people didn’t see Ukip’s underlying racism and all the main parties are going along with it.”

Delegate Graham Jarvis from Barnsley, South Yorkshire, said, “We will all be delighted that Nigel Farage lost in South Thanet. But we can’t underestimate Ukip, which won nearly four million votes in the general election.

“The trade unions bring us together and Ukip tries to divide us with its racist scapegoating – we need to stand up to Ukip.”

Steve Brewer added, “We should also join forces with the Stand Up to Ukip campaign, which brings together trade unions and campaigners.”

British values ‘are a fiction’

“The only value that the establishment has is profit.”

It passed with the central executive committee (CEC) qualification, which claimed that in reality “British values” are ones of “solidarity”.

The GMB conference backed a CEC statement on fracking that argued against opposition because of the perceived benefits for jobs, infrastructure and lower bills.

The CEC argued that opposing fracking would hinder the union’s ability to work with the industry and organise gas workers if fracking takes off.

Delegates were concerned about fracking’s destruction of the environment and climate change, but backed the leadership’s position of keeping the debate open.

At the crossroad with the European Union

The growing debate in the trade union movement about the referendum on Britain’s membership of the European Union (EU) came through in conference debates.

The trade unions were won to supporting the EU following the defeats of the 1980s. Their argument was, “We can’t beat Margaret Thatcher in Britain, so we have to look to the EU to guarantee our rights.”

Many trade unions are now questioning their support because of free market policies – but some also buy into the idea that free movement of labour within the EU can undercut wages.

GMB European officer Kathleen Walker Shaw told conference, “We are at a crossroad with the European Union.

“These workers’ rights all came from Europe – in the halcyon days of the 1990s – the social and economic are now out of kilter.”

Prime minister David Cameron and British business will fight to remain in the EU because it pushes free market policies. But Cameron is also pushing for “reforms” that would allow the Tories to clamp down on migrants from the EU.

Walker Shaw argued, “The shape of those reforms will seal or sever trade union support for the EU.

“Our message to David Cameron, the CBI and the negotiators is, ‘We support a social Europe’. If you vote against our rights, GMB members are not going to be lining up to vote Yes for an EU that has nothing in it for them.

“That’s not a threat, it’s a statement of fact.”

The GMB has not come out against the EU and is still trying to straddle both positions.

But it also points to a bigger debate on how the left should oppose the EU – and how it can do it on an anti-austerity and anti-racist programme.