LONDON Undergound workers made front page news in London last week because they voted overwhelmingly to strike. Socialist Alliance supporters will be outside underground stations urging solidarity with the strikers. Why do socialists stress the importance of strikes? How do we answer people who say strikes cause inconvenience to ordinary people? Workers do not strike on a whim. They lose pay, and unionised workers who go on strike for long periods usually only get a small amount of money from their union.

Many strikers say they feel forced to go on strike. It could be driven by an attack on working conditions, a pay cut, increased hours or the workplace being threatened with closure. Workers have also struck against a manager’s racist bullying, as in Ford Dagenham in 1999, or to fight sexual harassment, as Oxford postal workers did in 1990.

On London Underground the workers’ fight benefits passengers, as privatisation would devastate the service. Many people have sympathy with strikers, even though their lives may be affected by the strike. This is because every worker feels under the same pressure. But strikes are more than just another form of protest like a demonstration or stunt.

They are when workers challenge the key drive inside the system we live in-the drive for profit. Bosses want workers to work harder over longer hours for the lowest pay they can get away with. They aim to maximise their profits while making workers feel they have no choice but to accept the situation. When workers’ grumbling turns into a decision to go on strike, they are using the power they have to halt the flow of profits.

Production lines stop, offices don’t run, buses and trains don’t operate. In the case of the Dudley health workers their strike affects the provision of key services in the hospital. Strike action can have a massive impact because of the way production is integrated in the global economy.

This was shown when 9,200 car workers in a General Motors (GM) plant in Flint, Michigan, in the US in July 1998 began a strike over job insecurity. Their action hit 25 out of 29 GM plants in North America, 189,000 workers and cost GM an estimated 3 billion.

Workers striking in South Africa and South Korea can be an inspiration to workers in Britain to fight against their own conditions. Strikes can also have a further impact.

They are a break from the old routine of dragging yourself into work. Many strikers begin to organise picket lines themselves and run strike meetings. In this way the experience of being on strike can raise workers’ confidence. Many of the women involved in the Dudley health workers’ strike report that they have travelled to parts of Britain they have never been to before, and that they would never have imagined they could speak in front of hundreds of people. Strike action can also raise wider questions about the world.

These can be issues like the way the law is used to stop workers striking, why the media take the bosses’ side, whether the union leaders are supporting the action, and what democracy means as people begin to ask who has real power in society.

At key points in history strikes have moved beyond the sectional issues they began over and become a fight over the whole structure of society. This happened in Russia in 1905 when a printers’ strike gave rise to a new form of organisation, the soviet or workers’ council, made up of workers from all different workplaces, which challenged the rule of the official government. Of course strikers don’t start by asking how we can take on the whole system. But strike action raises the question of how exploitation works, who benefits and if there is an alternative.

Socialists are eager to build solidarity with strikers, to help them win their dispute, and have discussions and debate with them about the way forward. We encourage others to do the same. This can involve going down the picket line to offer support and taking a collection round your workplace, college or community.

Demonstrations are a great display of our disgust at the way the system crushes people down. Strikes hit at the heart of the beast and can provide a way of changing that system for good. 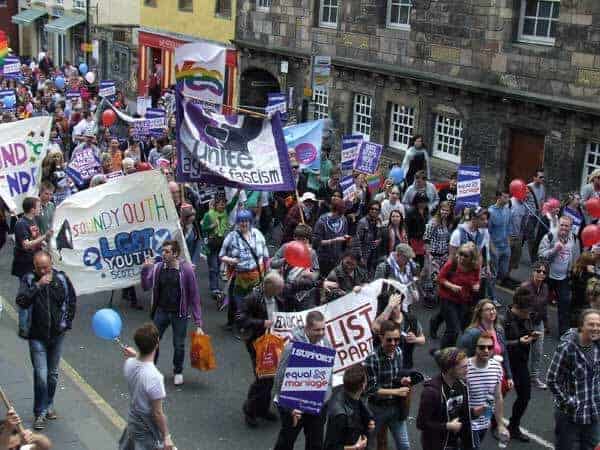