This article is over 14 years, 9 months old
Chancellor Gordon Brown has declared war on the pay of every public sector worker. That’s why 20,000 members of the PCS civil service workers’ union were set to strike on Friday of this week.
Downloading PDF. Please wait...
Saturday 31 March 2007

Chancellor Gordon Brown has declared war on the pay of every public sector worker. That’s why 20,000 members of the PCS civil service workers’ union were set to strike on Friday of this week.

Other trade unions could follow them into action. Brown’s message for public sector workers in his budget last week was, “Prepare for pay cuts.”

He said that the government will hold “firm to our commitment to maintain discipline in public sector pay” of 2 percent pay rises in an attempt to keep inflation down.

“With today’s inflation rates going up to 4.6 percent and living costs rising much faster than council workers’ pay, millions of workers are being pushed closer to the breadline.

“This is a paltry pay award which will drive down the morale of staff further.

“Our members are angry. Some 70 percent of employers have failed to complete pay and grading reviews promised by the end of this month.

“In addition, the review of the local government pension scheme has yet to be completed.”

Thousands of members of Unison working in the NHS have registered their anger at Gordon Brown’s demand that their pay increase be limited to just 1.9 percent.

Consultative ballots organised by the union at workplaces across the country have recorded massive votes for rejection of both the government’s offer and the original 2.5 percent recommendation of the NHS pay review body.

The same ballots have seen equally large votes for action including strike action, if the pay offer is not raised.

Votes of between 70 and 90 percent for strikes have been common. Activists say that, in many cases, it is the lowest paid workers who are most eager to hit back.

Union branches with only a weak tradition of activism are also recording that interest in the union has been boosted by the prospect of a fight over pay.

Health secretary Patricia Hewitt claims that most NHS staff have seen large increases in their pay over recent years. But the Agenda For Change reorganisation of grades froze or reduced the pay of many health workers.

The ballot results were due to be discussed at a special meeting of Unison’s health service group executive to be held on Thursday of this week.

That meeting should send a clear signal to the government that the 1.9 percent insult will be rejected and that strikes are on the agenda.

A sign of the anger over public sector pay is also to be seen in the strike by around 20,000 members of the PCS in the Identity and Passport Service (IPS) and the Ministry of Defence (MoD) set for this Friday over the imposition of below inflation pay rises.

The rest of the union is taking action short of a strike on Friday.

This will see people refusing to do paid or unpaid overtime and taking proper rest and lunch breaks.

PCS members in the Crown Prosecution Service, Department of Health, Land Registry and Learning Skills Council are also to begin a month long work-to-rule over pay.

This is the next round in the union’s battle over job cuts, low pay and privatisation. A quarter of a million PCS members struck solidly on 31 January.

The PCS is organising lunchtime rallies for towns and cities across Britain this Friday.

Joel Hirsch, the PCS branch secretary of the IPS London and South East branch, told Socialist Worker, “The strike will be very well-supported across the passport service. This is our third one-day strike in the past few months.

“The government is trying to grind workers down and people are angry. We have been organising with the MoD workers for this strike.

“In London there is going to be a lunchtime rally at the Emmanuel Centre on Marchmont Street.

“We are encouraging PCS members who won’t be on strike and members of other unions to attend the rally.

“John McDonnell MP, the left wing challenger for the Labour Party leadership, will be speaking.”

Yet more cuts for public sector

translates as yet more cuts in the public sector.

The Department for Education and Skills is seeing a virtual spending freeze. Its budget will rise by only 2.7 percent in real terms between 2008 and 2010-11.

The vast majority of that increase – 2.5 percent – will be spent in England. Scotland and Wales recieve virtually nothing.

The education spending clampdown contrasts with previous years which have seen average budget increases of 4.4 percent in real terms each year.

Most government departments are set to see cuts in spending in real terms. The Home Office has been hit by a spending freeze. The Department for Constitutional Affairs will get a 3.5 percent a year cut.

Nine departments, including the Department for Work and Pensions and the treasury, are facing 5 percent reductions.

Strikers gear up for May Day

Tuesday 1 May is set to see a major day of strike action in defence of public services.

The PCS civil service workers’ union is set to announce a strike of around 250,000 members.

The union is battling against New Labour’s plans to cut 104,000 jobs, unfair pay and the increased privatisation of public services.

These are having a devastating impact on the services that PCS members deliver to the public.

May Day is a crucial day for all workers and the PCS is approaching other unions to get them involved.

Sean Vernell, who was recently elected to the national executive of the UCU lecturers’ union, said, “The London region of UCU met last weekend – with the main focus on the government’s plans to attack Esol English language teaching and adult education.

“The further education sector is facing cuts of £27 million in London this year.

“UCU London region is encouraging both furher and higher education

lecturers to use 1 May to highlight the cuts to adult education and Esol classes, by, for example, holding lunchtime protests at their workplaces.”

Every trade unionist should be organising now on a local level to ensure 1 May is the biggest possible show of strength.

May Day can be a rallying call for everyone who wants to hit back at New Labour over low pay, privatisation and cuts.

Dover Harbour Board workers to strike 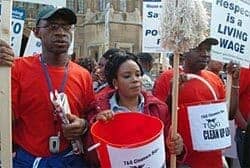 Parliament's cleaners out to mop up resistance