This article is over 15 years, 4 months old
More than a million NHS staff and others working in the public sector are facing a pay cut in real terms after chancellor Gordon Brown decided to implement their pay review body recommendations in two stages.
Downloading PDF. Please wait...
Saturday 10 March 2007

More than a million NHS staff and others working in the public sector are facing a pay cut in real terms after chancellor Gordon Brown decided to implement their pay review body recommendations in two stages.

The 2.5 percent pay increase will now equal just 1.9 percent – well below the retail price index measure of inflation, which stands at 4.2 percent.

Peter Allensen, national officer of the T&G union, said, “Our members are being hit by a double whammy of below real inflation pay rises plus an increasing workload with job cuts, increased pressure, poor consultation and falling morale.”

According to a poll commissioned by the Royal College of Nursing, nearly two thirds of nurses would be willing to take industrial action if they receive an unsatisfactory pay deal this year.

Health secretary Patricia Hewitt claims that NHS staff have seen real improvements in pay over recent years and that this years’ offer should be seen in context. But many of the lowest paid workers in the NHS have reason to disagree.

Iain works as a porter at the Ninewells hospital in Dundee. He said, “I take home about £850 in an average month. Earning this kind of money means I have to think about every penny I spend.

“It is not really possible to save when you earn £6 an hour and you have children, so my family haven’t had a holiday in many years.

“If I wanted to go away for a week or so, I would have to take out a loan. And I would never be able to take them abroad.

“But my situation isn’t the worst. I work with domestics who earn so little that they have to do two jobs. They work from very early in the morning in the hospital, and in the afternoon they go to work cleaning schools.

“I’ve considered doing two jobs myself but if I did, I would never see my son.”

Bev Richards is a healthcare support worker at the Mile End hospital in east London. She has worked in the NHS for 25 years. She said, “The government claims that health workers have done very well under Labour. I don’t agree.

“In that time all my bills have risen. My council tax has risen from about £800 a year to over £1,000, yet my pay has stayed the same. So how can the government say that I’m doing well?

“Everyday I look after patients. I wash and dress them, brush their teeth and take them to the toilet.

“I don’t think my bosses value my work, or the work of anyone on the lowest grades. But what would happen to the patients if we weren’t around?” 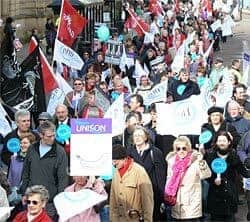 Day of action on 3 March - United action for the NHS 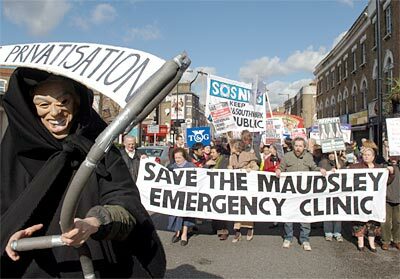 ‘Blair’s legacy is cuts, chaos and closures in the health service’