This article is over 14 years, 1 months old
Gordon Brown announced last Sunday that he will not reform the Tory anti-trade union laws. \"Successful governments are those whose eyes are fixed on the future not harking back to the past,\" he said.
Downloading PDF. Please wait...
Tuesday 08 July 2008

Gordon Brown announced last Sunday that he will not reform the Tory anti-trade union laws. ‘Successful governments are those whose eyes are fixed on the future not harking back to the past,’ he said.

‘So there will be no return to the 1970s, 1980s or even the 1990s when it comes to union rights, no retreat from continued modernisation and there can be no question of any reintroduction of secondary picketing rights.’

Even the moderate request for unions to be allowed to ballot members by phone and email is to be opposed.

This is a direct rebuttal to Derek Simpson, joint head of Unite, who last month called for secondary industrial action to be made legal again.

It is also a dismissal of every Labour-affiliated union that is in favour of changes to the anti-union laws.

The Labour Party is due to hold its national policy forum on 25 July – the day after the Glasgow East by-election.

This ‘Warwick Two’ meeting is supposed to be a key part of drawing up Labour’s policies for the next general election. It is really about keeping the unions on side politically and – importantly – financially.

All indications are that, at best, the government wants warm words with as few pro-worker commitments as possible in return for millions of pounds of union members’ cash.

The government has let it be known that it is in favour of allowing parents the legal right to take time off work to care for sick children. This would grant one of Unite’s proposals.

But that is all there is so far. And even then Brown added, ‘While we will push ahead with our family friendly agenda, we will do nothing that puts employment and future prosperity at risk.’

More significantly one union policy that Brown wants to exclude concerns housing. Motions backed by Defend Council Housing will not be allowed to pass at the policy forum.

In the run-up to Labour’s national policy forum, nearly 30 constituency parties have supported an amendment calling for a level playing field for councils that want to build new homes.

Similar calls have won the vote at three of the past four Labour Party conferences.

But national policy forum member Daniel Zeichner, Labour Party constituency representative for the east of England, said, ‘Our job is to relay Labour Party members’ opinion, not to bow to organisational pressure groups. Just because groups are well organised, does not mean to say that they will necessarily reflect wider opinion.’

One organised pressure group that will be putting acceptable amendments is the Labour leadership.

They are encouraging motions that endorse housing minister Caroline Flint’s appalling proposal to include commitments to seek work in the contracts of new council and housing association tenants.

The unions could make some simple demands. For example ending Brown’s public sector pay freeze would immediately improve the lives of millions of workers.

Unison could simply demand that the wage limit on public sector pay is lifted. And if Brown says no – then why bail out the Labour Party? 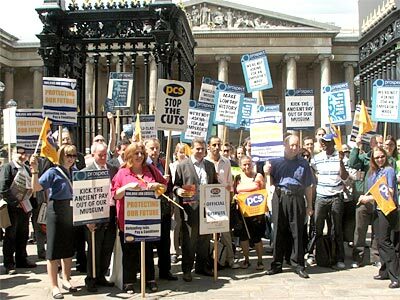 British Museum workers walk out on strike over pay

Rallies and marches on day of local government strike