The Retail Price Index (RPI), which is a more representative measure of inflation as it includes mortgage interest payments, also fell from 4.4 percent in June to 3.8 percent in June.

The inflation figures are worked out on a basket of goods.

If you had enough money to buy a digital camera, a camcorder, a personal computer and went to the theatre then you may have noticed they were cheaper than they were a month earlier.

The largest factor on pushing inflation down was food prices, as supermarkets cut prices across a range of products.

The average prices for furniture and furnishings fell by more than 10 percent in July as stores held sales.

Furniture stores had pushed up their prices sharply in June – ahead of the summer sales – only to cut them even more sharply.

Energy bills continued to fall due to the phasing in of gas and electricity tariff reductions and some new cuts last month.

The largest price increases that affect the inflation rate were increases in clothing and footwear.

Food prices are expected to increase over the next few months after the severe flooding in July hit crops, and as a global wheat crisis continues to put pressure on animal feeds and cereal prices.

Additionally, average petrol prices dipped by 0.3p a litre during July. Steep rises in the cost of oil at the end of the month could see this effect reversed.

Brown is insisting on a wage limit because he says inflation is running too high.

His central argument is that wage rises cause inflation. Yet the reality is that last month’s dip in the headline rate of inflation was entirely unaffected by wage rates.

So even though it is bosses who decide prices, Brown responds by attempting to slash the pay of millions of workers. 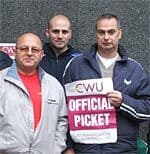