This article is over 17 years, 11 months old
A BUZZ went around the meeting room as 450 people crammed into Manchester town hall for an anti-racist rally on Thursday of last week.
By Helen Shooter
Downloading PDF. Please wait...
Saturday 24 January 2004

A BUZZ went around the meeting room as 450 people crammed into Manchester town hall for an anti-racist rally on Thursday of last week.

The Unite Against Fascism rally was the liveliest political meeting in the city for years. It was called by the local group Manchester Against Racism.

Unite Against Fascism is a new national organisation to gather everyone who opposes the British National Party (BNP), which is hoping for a breakthrough in the European and local elections on 10 June.

Julie Hesmondhalgh, who plays the character Hayley, reflected the mood of the meeting when she spoke about the ‘sinister side’ of the BNP that they try to hide.

‘We implore ordinary men and women who are thinking of voting BNP because they are disillusioned with politics and with the Labour Party not to do that, but to think about what the BNP really stand for,’ she said. ‘No matter if you think that all the others are shysters, go out and vote because apathy is the biggest ally of the BNP.’

The meeting demonstrated the wide range of support for a campaign against the BNP. It ranged from a speaker from the CWU union, who pledged the support of union members, to councillor Afzal Khan from the Muslim Council of Britain, and Gordon Taylor, chief executive of the Professional Footballers Association, whose message promised ‘wholehearted support’ and a donation of £250.

The speakers were interspersed with music from a local community choir, singers and poetry. Many in the audience spoke of how the meeting inspired them to go out and campaign against the BNP.

THE ANTI-RACISM Network in Northern Ireland has called a demonstration on Tuesday 27 January to protest against racist attacks in Belfast.

Racist attacks have increased from fewer than 30 in 1997 to over 300 last year. The demonstration is backed by the Irish Congress of Trade Unions and will launch a serious campaign against racism in Northern Ireland.

A series of Unite Against Fascism rallies are planned around Britain. For details of these or to join Unite write to Unite! c/o Natfhe, 27 Britannia Street, London WC1X 9JP. Phone 020 7833 4916. Email [email protected]

Unions show they have key role in fighting BNP 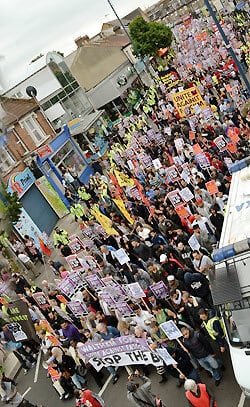 This is how to smash the EDL