This article is over 12 years, 6 months old
Trade unionists in Great Yarmouth are disgusted at the news that East Port UK is to sack the remaining 11 dockers it employs at the outer harbour.
By Kevin Reynolds, president, Great Yarmouth trades council
Downloading PDF. Please wait...
Tuesday 30 June 2009

Trade unionists in Great Yarmouth are disgusted at the news that East Port UK is to sack the remaining 11 dockers it employs at the outer harbour.

This follows five dockers being made redundant a few weeks ago. Many of the dockers have worked at the ports for more than 20 years.

The Unite union says it has been told that the dockers are to be replaced with casual agency labour – thus driving back conditions at the port.

Although 11 jobs may not seem many, this action will be seen as a green light for port employers across Britain to use the recession as an excuse to attack terms and conditions and casualise the ports.

As a trades council we will be talking to the East Of England Development Agency which donated a lot of public money to East Port’s outer harbour project on the basis of jobs, training and development for Great Yarmouth.

We will not stand idly by and watch these jobs be axed without any resistance.

There will be a demonstration of dockers and trade unionists outside the East Port headquarters in Yarmouth at 4.30pm on Thursday of this week.

We urge anyone concerned about these developments to come along and show solidarity with the dockers.

What lies behind UKIP’s success? 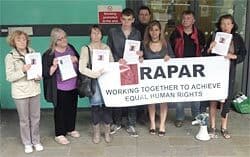