Greece’s government is falling apart after less than a year because it tried to close the ERT state broadcaster and sack 2,500 workers.

Workers refused to be sacked and said sack the government instead.

They occupied ERT buildings across Greece and broadcast online under workers’ control.

Every night there are free concerts in the big garden of ERT’s head office.

There’s a huge banner for Costas Sakkas, an anarchist who was jailed without trial and is on hunger strike.

Now one of the three parties in the coalition government, Democratic Left, has walked out because of ERT.

Democratic Left is a rightward split from the radical left group Syriza.

Its support fell to less than 3 percent—meaning it wouldn’t get a single MP if new elections were called.

The remaining government of a weak, right wing party and a weak, social democrat party has a majority of just three MPs.  If it falls it will have to call

elections in the worst possible circumstances for those parties.

The new slogan in the movement is, “Do it like ERT”.

Governments across Europe are under pressure and revolutionary organisation is important.

We work inside the anti-capitalist left. We support strikes, and keep up the pressure for more strikes.

We also have a programme for how to get out of the crisis.

We argue for rejecting all the debt, for leaving the euro, and for nationalising the banks under workers’ control.

When we first made this argument people thought, “Workers’ control? Really?”.

Now they can see the national broadcaster under workers’ control.

The ruling class tries to divide workers. But revolutionary organisation can overcome this and lead workers in a victorious fight.

‘We must give answers’

The main opposition in parliament is the radical left coalition Syriza. It used its conference this month to move to the right.

Syriza wants to make it clear that it is ready to form a government to “save the country”. And it is prepared to be at the centre of a broad coalition to do that.

Its leader Alexis Tsipras has dropped hints about working with the Independent Greeks, a right wing split from the Tory party.

So even though Syriza members work with us in anti-racism campaigns, Tsipras was very careful not to mention them in his conference speech. Instead he praised the “patriotism” of the police.

He and those around him have this idea that ordinary people are racist, so Syriza shouldn’t talk too much about anti-racism.

The conference resolved to dissolve all the organisations that make up Syriza, turning the coalition into a party with Tsipras at its head.

The Second World War resistance hero Manolis Glezos, a communist famous for tearing down the Nazi flag over the Acropolis, is now a Syriza MP. He was one of many who opposed the move.

Manolis said this is not about unity—it is about Tsipras’ group seizing control.

We in SEK, the Socialist Workers Party’s sister organisation, are part of the Antarsya coalition of the anti-capitalist left. This is much smaller than Syriza. But it is growing.

Antarsya held its second conference last month. Many people had written us off after elections last year, when we lost votes to Syriza. But now we have recovered in the polls and are doing well in union elections.

In the teachers’ union Antarsya and its allies came second—ahead of Syriza, Pasok and the Communist Party.

Everyone can see that the government just needs one more push and it will fall. But what happens after that? People are looking for an answer and it’s up to us to give one. 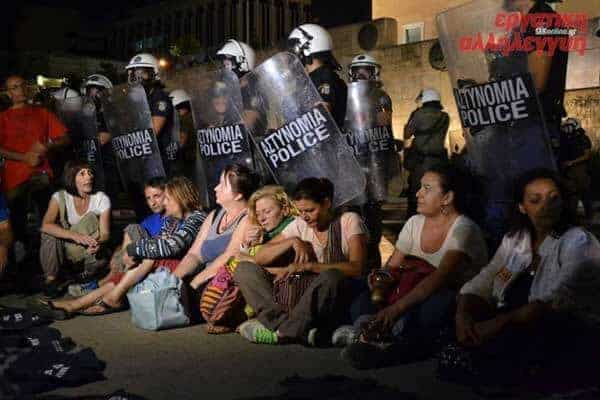