This article is over 11 years, 10 months old
Greek workers have stepped up their resistance to cuts while politicians and bosses are demanding more.
By Matthew Cookson
Downloading PDF. Please wait...
Tuesday 09 March 2010

Greek workers have stepped up their resistance to cuts while politicians and bosses are demanding more.

A third general strike was set for Thursday of this week.

European Union leaders are arguing over whether the EU or the International Monetary Fund should police Greece’s cuts.

It is a debate over how best to impose the equivalent of the structural adjustment plans that were pressed on African, Asian and South American countries in the 1980s.

But while bosses debate their best line of attack, workers are fighting back.

“Things are really moving here, and workers’ confidence is rising,” said Panos Garganas, the editor of the Workers Solidarity newspaper.

“Big demonstrations took place in many places the evening before the general strike.

“Some unions extended the strike to cover the whole day on Friday.

“Workers held a large rally in front of parliament, and clashed with the police when they tear-gassed the crowd.

“Tax workers struck on Monday and Tuesday of this week. Workers who were sacked by Olympic Airways occupied parts of the ministry of finance last week and are still there.

“Garbage collectors have shut down the main collection point in Athens. Teachers are discussing a five-day strike.

“Court clerks are striking for a few hours every day too. Workers in the national printshop refused to print the piece of legislation containing new cuts measures, and occupied their workplace until Monday.

“It is a standard requirement that each piece of legislation must be published in the official gazette before it becomes law.”

“Opinion polls have shown that over 70 percent of people reject cuts in public sector wages.

“The only proposal that gets positive approval is the token plan to increase taxes on luxury goods, such as yachts.”

The government believes this will claw back £4.3 billion.

Last week’s announcement followed plans for a wage freeze in the public sector, raising the retirement age and cutting 10 percent from allowances.

He attempted to assure them that Greece was doing all it can to reduce its deficit, after implementing the attacks that they had been demanding.

The fight in Greece is crucial for all workers across Europe.

He told Socialist Worker, “This is only the start.

“The government is taking everything away from workers in the private and public sector.

“This has implications for the whole European working class, especially those in countries in similar situations to Greece such as Britain, Spain and Portugal.

“Greece is an experiment that, if successful, will be tried in other countries.

“We need your solidarity as, like you, we don’t want to pay for the implications of a crisis we didn’t cause.”

The Right to Work campaign has organised a solidarity tour, with leading Greek union activist, Vasilis Sylaidis and activists from unions and campaigns in Britain.

It is holding the following public meetings:

For more information on the tour go to www.righttowork.org.uk

New battles against cuts in Ireland 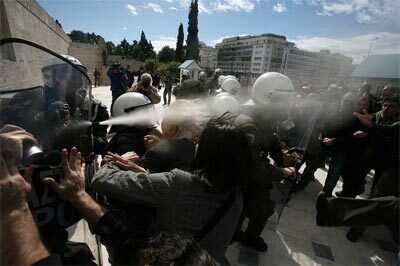 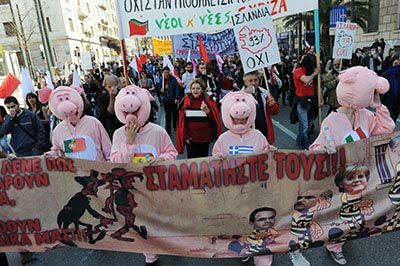