Growing disillusionment and fury at lack of Labour party democracy

This article is over 14 years, 7 months old
The failure of John McDonnell to get onto the ballot paper for Labour leadership, and the lack of democracy in the Labour Party, has opened up a big debate among people in and around the party.
By Matthew Cookson
Downloading PDF. Please wait...
Tuesday 22 May 2007

The failure of John McDonnell to get onto the ballot paper for Labour leadership, and the lack of democracy in the Labour Party, has opened up a big debate among people in and around the party.

For many it is the final straw, and making them consider their position within the Labour Party.

Mike Beldock is a Labour Party member of four years standing in Kent and also a member of the PCS civil service workers’ union.

He told Socialist Worker, “My first thought when I heard that not enough Labour MPs had nominated John McDonnell was ‘Why?’

“There was such a clear mood for a debate and election in the party. Why has this been denied?

“You have to ask why so many Labour MPs were desperate to sign Gordon Brown’s nomination.

“Is it because it is a good move for their career?

“I never expected that John McDonnell would win but I thought that having a debate would allow us to show that there are still people concerned about the Blair/Brown axis in the party.

“If we had had that debate and John McDonnell had done well, which I expected him to do, it would have put pressure on Brown to take our views on board.

“Some people are calling for everyone to stay in the Labour Party. I will have to take stock of that over the next few days. We have to raise the lack of democracy in the party at our constituency meetings.

“The deputy leadership election allows us our one opportunity to ask these people what choice they offer. They are all signed up to Brown’s policies.

“Why should we back them when they’ve denied us democracy? This is an utter betrayal of the Labour Party’s membership.”

“It is absolutely shocking and an appalling indictment of Labour MPs,” Jim, a Labour Party member in Scotland for over 25 years, told Socialist Worker.

“They are a bunch of unprincipled sycophants. They have abandoned any vision of a juster world based on redistribution.

“Gordon Brown is from the same stable as Tony Blair. He supported the illegal war on Iraq and should be indicted for war crimes.

“There is great disillusionment among Labour activists. The grassroots of the party is getting smaller. It’s harder and harder to see the Labour Party representing the trade union movement – those ties seem to be eroding.

“I still have a party card and intend to vote for Jon Cruddas in the deputy leadership election. It is amazing that the same MPs that nominated Cruddas also nominated Brown.

“Quite a lot of us on the left of the party will be considering our position. People will feel a bit shattered as we have stuck with the Labour Party.

“New Labour has done immense damage to the labour movement. It is highly doubtful as to whether Labour will continue to represent the working class.”

Mary Pope is a PCS member in Nottingham and a former Labour Party member. She said, “I am desperately disappointed. I might have rejoined the Labour Party by 1 June to vote for John McDonnell as Labour leader if he’d got on the ballot paper.

“I left in 1999 over New Labour’s treatment of asylum seekers.

“I would rejoin if I thought Labour had changed and it was the party I grew up in. I never thought I wouldn’t be in the Labour Party.

“I was the first to leave in my family. They all left after me.

“I’m looking for an alternative and thinking about Respect, although I remain to be convinced on a few points.” 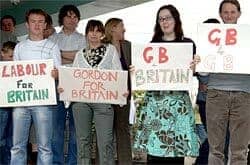