WILLIAM Hague’s claim that he drank 14 pints of beer a day in his youth received much publicity. The same interview also revealed an expensive taste in clothes. The total cost of his suit, tie, shirt and shoes came to 3,289.50. His tailor is Henry Poole of Saville Row. The firm served King Edward VII, Winston Churchill and General de Gaulle.

Now its customers include Hague and chancellor Gordon Brown. Their suits cost 1,828. Perhaps even more shocking is the shoe bill. Hague’s made to measure footwear comes from G J Cleverley of Bond Street-at up to 1,300 a pair.

Cambridge Education Associates took over the running of 70 schools in the north London borough in January.

The firm admits it has drawn up plans to sell off one of the borough’s schools. It refuses to say which, but targets are likely to be prime sites near to the Angel and Upper Street areas, where property prices have soared.

McFARLANE TOYS is rejoicing at the success of its latest action figure toy in the US-a man strapped to an electric chair. His eyes glow red as the jolt of electricity jerks his body and he appears to convulse in agony.

The “toys” sell for 20 each and there is a waiting list of death penalty supporters anxious to give them to their children.

SOMETHING STRANGE has happened to the front cover picture of Journal, the glossy publication produced by the General Federation of Trade Unions (GFTU). It features an excellent photo of the Birmingham demo in April to save jobs at Rover.

But the Socialist Worker heading on every placard in the foreground of the picture has disappeared. This is even stranger when you consider that in a similar picture inside all the headings have returned. No doubt the GFTU is very much against deliberately distorting the truth and will want to investigate how this happened.

WHEN MPs eventually come back from their marathon 14 week holidays they will continue living in comfort. Some 200 of them will be moving into new offices in Portcullis House opposite parliament. No expense has been spared in the 230 million building.

Just the bronze cladding on the outside cost 30 million. Each one of the MPs’ offices will boast a 440 armchair with a snooze position, which will no doubt be well used. The furniture bill for each room comes to 3,100, plus another 1,325 for carpets.

Green leather window seats which line the windows in the building come in at 205,000, while 12 fig trees imported from Belgium are costing another 150,000 of public money.

Last month a controller warned, “We no longer have the runway capacity we need to provide the safety margins that are necessary.” “I feel a serious incident is imminent,” said another controller. Instead of listening to the controllers’ fears and putting resources in to tackle the problem, New Labour still plans to press ahead with its lunatic privatisation of air traffic control.

FORTY YEARS after the murder of the Congolese independence leader Patrice Lumumba, evidence has emerged that US president Dwight Eisenhower directly ordered the CIA to “eliminate” him. A minute-taker at a White House meeting vividly recalls the president turning to CIA director Allen Dulles and ordering that Lumumba be got rid of.

Lumumba was elected the first post-independence leader of Congo when it threw off Belgian control. He was opposed to US control of the country and wanted to use Congo’s mineral wealth to improve the country’s conditions.

After Lumumba was murdered the US imposed Joseph Mobutu as leader. He ruled up to 1997. He served the US and the West faithfully, leaving the country bankrupt and divided, fuelling the present civil war in the Democratic Republic of Congo.

These explosions were generally blamed on the left. But, according to Maletti, the US organised them to stoke up tension, discredit socialist ideas and provide an excuse for a crackdown.

The examples he gives include the Milan bombing in 1969 which killed 16 people. The police rounded up left wing “suspects” and murdered one in detention-the case which was the basis for Dario Fo’s play Accidental Death of an Anarchist. Pthis line indicates the end of the image area

“YOU CAN’T touch me, my father is a barrister.”

“WE HAD a nanny and a lovely garden, the staple ingredients of childhood.”

“ELDERLY people with empty refrigerators are more likely to be readmitted to hospital compared with patients with adequate refrigerator content.”

“THE TRICK is to gather the information you need without the subject even knowing you have been there.”

“COULD WE have a drier white wine and maybe even a dry ros? Why no all-day breakfast? A greater selection of hot puddings is missed.”

“IT IS not extravagance. At this stage we are not into gold-plated taps.”

“NEW LABOUR is just about power at any price and spin, spin, spin. I won’t be voting Labour next election… I think you may well have four million odd people like me doing just that.”

“BEING A force for good does not just mean cuddling orphans, and giving aspirins and cups of tea to old ladies.”

A fightback in Argentina 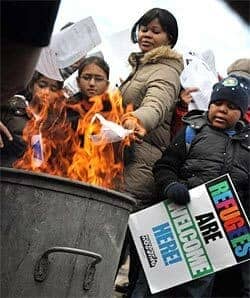