TORY LEADER William Hague has driven his party even further to the right in a desperate attempt to win votes in this week’s elections. In a cynical and calculated move Hague deliberately played the race card last weekend.

On television he virtually invited the Nazi National Front to take to the streets against asylum seekers. Hague used the same rhetoric as Enoch Powell did in the 1960s and 1970s. And, like Enoch Powell before him, Hague will have blood on his hands as racist attacks and murders follow.

On last weekend’s Jonathan Dimblebly TV programme, Hague’s language was consciously designed to stir up hatred. He was challenged by one woman from the audience who pleaded with him, “Don’t use words like flooding and swamping. I find it intimidating.” Hague replied with contempt, “We should use words properly with their full meaning. The dictionary definition of a flood is a flow that is out of control. “There is no question that we have a flow that is out of control. We have asylum seekers who are bogus, and if they’re bogus we should call them bogus.”

When a black woman from the audience complained that Hague had given credibility to the Nazis who marched near Birmingham last week, Hague replied, “We would end up seeing more National Front marches in Birmingham if we failed to deal with these problems.”

Hague knows he is giving the Nazis direct encouragement. They will be cheering him on. They hope to grow in the wake of his bigotry as they did whenever Enoch Powell opened his mouth.

Powell stirred up race hatred in the late 1960s with his infamous “rivers of blood” speech, and again in the 1970s. In 1976 he denounced the “limitless increase in the coloured population in English cities”. Powell’s speech gave confidence to the Nazis to go on the offensive. The Nazi National Front saw a growth in their support.

At a by-election in Walsall that followed Powell’s speech the National Front grabbed nearly 3,000 votes, 7 percent of the vote. The racist scapegoating also led to a huge rise in racist attacks and intimidation, including a series of murders of Asians.

HAGUE AND the press are lying about there being a high level of rural crime. The British Crime Survey shows that the rate of household burglary in inner-city areas in 1997 ran at 8.5 percent. In rural areas the rate was 3.4 percent. Last year there were 12.6 burglaries per 1,000 households in the London area. In Norfolk the figure was only 5.7 burglaries per 1,000. Banks

A report by the government’s Countryside Agency last week found that most people living in the countryside did not think rural crime was a problem. They were more worried by job shortages, housing, transport, the axing of local banks and post offices, and the lack of other services. The real source of people’s fears in rural areas is big farmers and landowners who dominate-the very people the Tories defend and represent.

NAZI NATIONAL Front supporters, like these who recently marched in Margate, cheer every time the Tories whip up racism against asylum seekers

WILLIAM HAGUE has never backed any genuine cases where people have acted in self defence. If so, he would be arguing for the release of Satpal Ram from jail. Satpal was jailed in 1986 after he defended himself from a vicious racist attack. Or Hague would be championing the call for freedom for Winston Silcott. Winston was cleared of the murder of PC Blakelock. But he is still in jail for a clear case of self defence. Winston defended himself against knife wielding Anthony Smith.

Straw opens the door for right

HAGUE IS pushing the Tory Party so far to the right that even some Tory commentators have attacked him. Peter Riddell in the Times, for example, warned Hague against “trying to be a tabloid columnist”.

Hague’s main aim is to motivate his core support and to shore up his own position as Tory leader. New Labour’s Jack Straw rightly condemned Hague for encouraging the Nazi National Front.

But it was Straw’s own scapegoating of asylum seekers through the Asylum and Immigration Act that opened the door for Hague. Millions of people feel let down and betrayed by Labour’s failure to deliver over the health service, schools, jobs and decent pay. Hague and the right wing press know this only too well. They want to use the disillusion with Labour and turn it in a right wing direction. That makes it more important than ever to push for socialist policies.

The ‘hero’ who shot a boy in the back

WILLIAM HAGUE last week leapt to support Tony Martin, the farmer who shot a 16 year old teenager he caught burgling his farm. Hague claimed, “There is all the difference in the world between the career criminal who sets out deliberately to burgle a house and the terrified homeowner who acts to protect himself and his home.” This turns the truth completely on its head. The jury convicted Martin because he shot unarmed teenager Fred Barras in the back.

Far from acting in self defence or on the spur of the moment, Martin was lying in wait, fully clothed and armed. He had previously shot at someone who was merely taking some apples from his orchard. Hague and the right wing press have used the Martin case to push their own right wing “law and order” agenda.

Since Tony Martin’s conviction the right wing press have run stories about jury intimidation. But there has been NO evidence to back up these allegations. Last week a spokesperson for the Lord Chancellor’s office said, “There has been no formal complaint from jurors of any intimidation.” 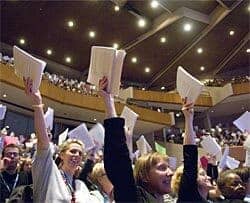 Sats: the tests that fail our kids

Living Wage protest on May Day