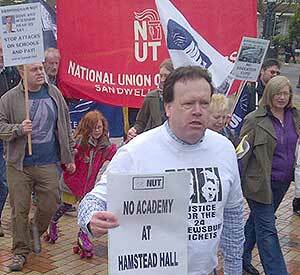 Strikers led the march into the rally (Pic: Julie Sherry)

Over 800 teachers, parents and campaigners crammed into the International Chamber of Commerce in Birmingham on Saturday of last week.

They joined a rally organised by the NUT and NASUWT teaching unions.

Over 200 people, mainly from the NUT, also joined a feeder march led by strikers from Hamstead Hall school (see below).

NASUWT general secretary Chris Keates was applauded as she laid into the coalition.

NUT deputy general secretary Kevin Courtney, accused Tory minister Michael Gove of, “running down our schools to soften them up for privatisation.”

Both talked of reluctant strikes, with Courtney also encouraging support for the action in the north west of England on 27 June.

But their key message was for teachers to put pressure on the government by writing to MPs and councillors. But for many the emphasis on postcard politics wasn’t enough.

As one NUT rep from north Birmingham said, “What they have said today is nothing I didn’t already know.

“The point is, what are we doing about it?”

We must build for the maximum solidarity we can show solidarity with the north west strike. And we need to ensure that we pass the joint union pay policies in our schools.

But we must also continue to put the pressure on the unions to call action.

Around 500 teachers also rallied in Leeds. Further rallies are planned in Newcastle and Cardiff on Saturday of this week.

Teachers at Hamstead Hall School in Birmingham began a three-day strike on Tuesday of this week against plans to turn the school into an academy.

It follows successful walkouts on Thursday of last week and the previous week.

Voices from Africa, Voices of Resistance — an inspiring day of debate on Africa

Planning to make this a May Day of resistance 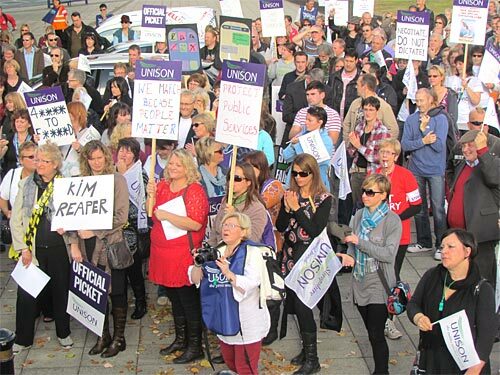