MORE THAN six out of ten workers fail to take their full holiday entitlement. Workers lose an average of 3.6 days holiday a year because they feel pressurised by their bosses or because they have too much work to get through. And even those who do manage to take all their holidays end up feeling guilty about it.

The report, by dot.com firm totaljobs, found that bosses foster the idea that holidays are a privilege and not a right. One quarter of people say their requests for holiday time they are entitled to are met with “raised eyebrows” from their employers.

Four out of ten who don’t take all their holiday leave get no compensation or time off in lieu. And some 88 percent of workers struggle into work when they are ill.

Cut off without a cent

“RETROGRADE, counter-productive and bound to increase crime.” That is the verdict of the Penal Affairs Consortium, which represents 41 organisations, on government plans to remove the right to benefits for anyone who breaks a community service order.

Up until now the courts have decided whether someone who breaches such an order can continue to claim benefits. But New Labour is planning to give the Department of Social Security the power to strip someone of their benefits without a court hearing. That will force the claimant to live on starvation rations before a court hearing has been held to decide whether they are guilty or innocent. It takes an average of six weeks for such a court case to come up.

MULTI-MILLIONAIRE Labour peer Lord Levy paid just 5,000 in tax last year, despite his millions. Levy is a fundraiser for New Labour and a government “envoy” in the Middle East. His tax dodging was exposed last weekend in the Sunday Times. But the paper has a nerve.

It is owned by Rupert Murdoch who has avoided paying over 1.4 billion in corporation tax since 1988. Both the Tories and New Labour are stuffed full of millionaires who try every scam they can to dodge tax.

and given a peerage by Blair. He is worth at least 1 billion. He made his fortune by setting up in Bermuda and Belize to dodge tax.

OIL COMPANIES, financial consultants and building firms which have “donated” staff to the Treasury have won lucrative contracts and benefited from crucial policy changes.

The Observer has found that the number of “seconded” staff from big business to Gordon Brown’s department has mushroomed.

Among the “donating” firms to have come up trumps are:

THAMES TRAINS passed six signals at danger over a ten day period last month. Insiders say the latest incidents show that privatised rail managers have learnt nothing from Paddington, even as the inquiry into the disaster goes on. In one of the incidents a Thames Turbo overshot a signal outside Paddington station by up to 500 metres.

Workers forced out of London

We deserve a pay rise

“THIS IS a very significant increase in their pay. They deserve it.” So said Jack Straw in parliament last week. Who was he talking about -health workers, firefighters? No. Straw was talking about the Metropolitan Police.

He has just given them a 3,327 pay rise. The starting salary for London’s police constables is now 22,635. The rise, which works out at 64 a week, has been given to the police to help them cope with spiralling London house prices.

The new head of the Met, Sir John Stevens, immediately thanked Straw. But this is the same police force slammed as institutionally racist and incompetent by the Lawrence inquiry. Now will the government help out other workers who cannot afford to live in London?

Compare the police starting rate of 22,635 with others:

Workers are leaving Lon don because they cannot afford house prices that have risen by 23 percent in the last 12 months, and by 55 percent between 1996 and 1999. Even City bosses are worried about the drain of key workers. The London Chamber of Commerce asked the National Institute of Economic and Social Research to draw up a special report.

It found that 6,000 nurses, teachers, transport, post and council workers are being forced out of London every year. “If no action is taken the public sector could be crippled by a lack of suitable skilled workers,” says the Chamber of Commerce. So why are the police first in line for a pay hike when nurses got a mere 3.4 percent off the government this year?

LONDON MAYOR Ken Livingstone has rewarded his Tory rival with a powerful job in his “kitchen cabinet”. Livingstone has appointed Steven Norris to the body that is to replace London Transport.

This is even though Norris is in favour of the privatisation of the tube, and is a former head of the Road Hauliers’ Association. Londoners rejected privatisation when they elected Livingstone. At the same time Norris was also awarded the job of Tory vice-chairman by William Hague.

THE COST of the queen’s wall to wall wardrobes has “gone through the floor”. Costs spiralled after carpenters found that new wardrobes for the royal garments were so big they were in danger of collapsing through the floor of Buckingham Palace. In total some 7.2 million has been spent renovating Buckingham Palace, St James Palace, Clarence House, Kensington Palace and Windsor Castle.

THE GOVERNMENT boasts that it is lifting a million children out of poverty. But a report from the Family Policy Studies Centre says:

EVERY HOUR 200 of the world’s poorest children are sentenced to death because of the failure of governments to meet even minimal targets to cut world poverty. A new report by Oxfam accuses governments in both the rich and poor nations of “comprehensively reneging” on international commitments.

“If governments were on track for meeting the 2015 target there would be 1.7 million fewer child deaths this year,” says Oxfam. “The figures reflect a criminal complacency on the part of governments that are willing to tolerate mass poverty in the midst of rising global prosperity.” Oxfam says rich governments have cut aid budgets and “put debt repayments before the lives of children”.

LEGAL AID firms are set to organise a “week of action” starting on 3 July in protest at the government freezing funds, and blocking ordinary people’s access to the justice system.

The number of solicitors’ offices offering legal aid services has fallen from 11,000 to 5,000. Richard Millar of the Legal Aid Practitioners Group told Socialist Worker, “We want to make people aware that the Treasury is not funding legal aid properly.” 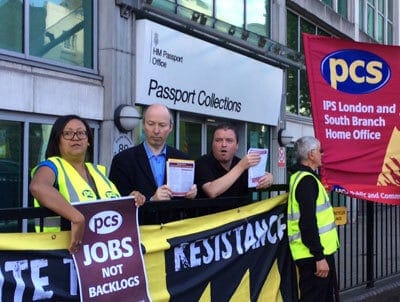