This article is over 15 years, 6 months old
Hackney Members of Keep Our NHS Public in Hackney, east London, lobbied the board of their local primary care trust on Wednesday of last week.
Downloading PDF. Please wait...
Saturday 15 July 2006

Members of Keep Our NHS Public in Hackney, east London, lobbied the board of their local primary care trust on Wednesday of last week.

The board was meeting to nod through major cuts and redundancies. The cuts will affect mental health and suicide prevention programmes, GP services and child protection.

Over 100 staff and members of the public protested. Health activist and Amicus union executive member Gill George said, “They were discussing better communication with the public while refusing to talk to us. They pushed through job cuts without regard for democracy.

“The protest in contrast was very democratic and brought together members of the diverse workforce affected by the cuts.”

When the board agreed the cuts, staff and local people held their own vote – unanimously against cuts and job losses. They then walked out and held their own meeting, to discuss building the campaign to defend the NHS.

At the protest, organised by the Unison union, porters, nurses, domestics and admin staff made clear that they would oppose what would effectively be a pay cut.

The payments wouldn’t even guarantee a parking space and the highest paid staff would pay exactly the same as the lowest.

Workers at New Cross Hospital, Wolverhampton, have said they would like to take action over £26 million cutbacks and 360 job losses.

In a consultative ballot, members of the Unison union voted by 99 percent for action and two thirds said they would take strike action to oppose cuts.

Regional Unison official Pete Lowe said, “If there is no movement from them we will have no choice other than to ballot our members for industrial action.” 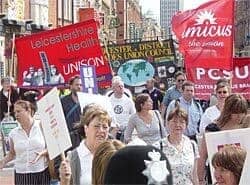