This article is over 15 years, 8 months old
Paul Harper is the branch secretary of Unison at the NHS Logistics depot in Maidstone, Kent
Downloading PDF. Please wait...
Saturday 06 May 2006

Paul Harper is the branch secretary of Unison at the NHS Logistics depot in Maidstone, Kent

‘There are five distribution centres across the country. As well as Maidstone, there is Alfreton in Derbyshire, Runcorn in Cheshire, Normanton in Yorkshire and Bury St Edmunds in Suffolk. There’s also a depot at Bridgend in South Wales run by the private company Exel.

Hospitals used to have their own stores, but today they only keep three days’ stock of goods. We supply the things they need at not-for-profit rates.

If NHS Logistics accidentally makes a profit, we have to pay a rebate.

We supply everything from cornflakes to syringes. If we were to have a three-day strike it would shut down the NHS.

The service isn’t just a regular supplier. We can do emergency orders.

For example, during the 7 July bombings in London, we made sure there were makeshift morgues available.

Workers earn about £300 a week if they are ordinary pickers in the depot. Because it’s part of the NHS, people are reasonably happy with that.

But now we’re threatened with privatisation, and there has been no real consultation on that.

The department of health say they are going to invest in depots, but there are hints that the company DHL is building a new distribution centre.

If companies are going to make a profit out of NHS Logistics there will have to be service cuts.

We are waiting for the go ahead for a ballot for industrial action. Unison general secretary Dave Prentis said he’d back action to defend the NHS. We already had a 92 percent vote in consultative ballot.

People are angry and want the union to do something, even thought we don’t want the NHS to suffer.’

‘They are trying to introduce a new computer system where the computer will read the prescriptions rather than us, although we’ve heard that this system isn’t actually working yet.

At least 50 percent of the work could go. If the new system comes in we will have just one office for the PPA – the Manchester, Liverpool, Preston and Bolton offices will close.

The staff who remain will have to deal with the difficult prescriptions that the computer system can’t cope with.

It’s also been made clear that they are planning to put the work done by the PPA out to tender.

We’ve been “market tested” in the past, but they found that we were so good that they decided we should keep the work in house.

We’re going to have a national meeting of union reps in the PPA in the next couple of weeks to discuss our plans.

Striking is a possibility. It would cause a lot of trouble if we stopped working. Chemists wouldn’t get paid for prescriptions and doctors wouldn’t get the information they needed.’ 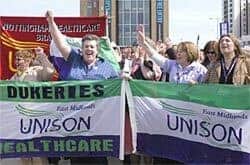