Health workers fight back across Britain

This article is over 15 years, 7 months old
One of the main hospitals expected to serve the central London Olympics site in 2012 – King George’s in Ilford – is being set up for closure of its front line emergency services as part of a £16 million cuts package being driven through by the Barking, Havering and Redbridge Hospitals Trust.
Downloading PDF. Please wait...
Saturday 06 January 2007

One of the main hospitals expected to serve the central London Olympics site in 2012 – King George’s in Ilford – is being set up for closure of its front line emergency services as part of a £16 million cuts package being driven through by the Barking, Havering and Redbridge Hospitals Trust.

King George’s is one of up to nine front line hospitals in and around London facing closure. The others are Chase Farm in Enfield, Queen Mary’s in Sidcup, Central Middlesex in Park Royal, Epsom and St Helier, St Peter’s in Chertsey, West Middlesex in Hounslow and Hammersmith Hospital.

More closure plans are expected to be unveiled as London’s hospitals try and claw back a combined deficit of more than £300 million.

Health workers in Gwent joined protests at Nevill Hall and Royal Gwent hospitals on 15 December in protest at cuts that centre on plans to halve the number of medical secretaries.

Some 5,000 Devon health workers were sent letters on 22 December offering voluntary redundancy as a cost-cutting measure. Health workers were told they had nine days to decide whether they wished to leave the NHS.

Workers were being offered six weeks pay if they decided to leave by 31 December.

Whipps faces £33 million cuts and the transfer of most services to Goodmayes or Barking. The protest was addressed by all three local MPs, trade union activists from the hospital and local trade unionists.

Charlotte Monro, chair of the Unison union at the hospital, told protesters, “The mass support for our campaign among local people has forced NHS officials to listen to our concerns. But we need to step up the pressure to keep Whipps as a fully funded district general hospital”.

Other speakers stressed the need for a fight to defend the NHS nationally and called on the national heath unions and the TUC to call a national demonstration. Local Labour MP Neil Gerrard MP said, “I congratulate the campaign on its success so far, but saving Whipps must not come at the expense of health provision in Barking.”

Charlotte announced plans for a major demonstration from the hospital to a rally in Walthamstow Market Square on 3 February and urged protesters to build it as widely as possible.

Brent teaching Primary Care Trust is cutting spending in 90 areas. Protester Shoba Rao said, “We want them to consider the implications of what they’re doing. Cuts will hit all Brent residents – especially the elderly, disabled people and children.” 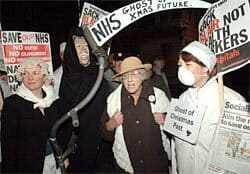 Protests build in battle to save our NHS