This article is over 14 years, 11 months old
A very slight improvement to the government’s pay offer to more than a million NHS staff has been enough to persuade the leadership of the Unison union to put plans for industrial action on hold.
Downloading PDF. Please wait...
Tuesday 31 July 2007

A very slight improvement to the government’s pay offer to more than a million NHS staff has been enough to persuade the leadership of the Unison union to put plans for industrial action on hold.

Details of the revised offer were still embargoed as Socialist Worker went to press, but early indications suggested that, despite marginal improvements, the new offer would still be implemented in two stages.

What is more, the new offer does not come at all close to the unions’ claim for a substantial pay rise above inflation – a policy that was reaffirmed by a unanimous vote at this year’s Unison health conference.

Despite this, Unison’s health executive has decided to postpone the ballot for industrial action.

Instead the union will conduct a consultative ballot on the new offer, telling its members that it represents the best that can be achieved through negotiation.

Crucially, Unison will not even make a recommendation as to whether the offer should be accepted or rejected.

Ballot papers are due out on 20 August and must be returned by 13 September. It is essential that activists start campaigning now against the new offer.

Health executive member Mark Ladbroke told Socialist Worker that his branch committee in Oxford is planning to meet next week to make its own recommendation. If, as is expected, the branch rejects the offer, it will publicise this in the union newsletter, on union notice boards and in meetings.

Mark said, “There is no reason why we cannot get this offer thrown out. But we have explain to our members what is going on. We should tell them just how bad the new offer is, both for the lowest grades, and those further up.

“The fact that the nurses’ RCN union is continuing with its ballot on the staging of the award is keeping the debate live on the wards – that gives us an opportunity to talk to people.

“We should think imaginatively about lunchtime meetings and rallies that our members will find easy to get to. And we can invite other unions that are taking action over pay along to help give people confidence.

“Gordon Brown is reported as saying that he wants three years of pay restraint. In reality that means three years of cuts to our wages. When people hear this, they are much less likely to vote to accept a lousy offer.”

Unison alongside the NHS Together organisation is planning a major demonstration to celebrate the foundation of the NHS, and a protest against the threats of cuts and privatisation. It will take place in London on Saturday 3 November. Activists should be arranging transport. 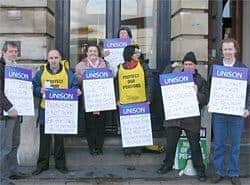