After a demonstration called by the Oxfordshire Anti-Cuts Alliance and Oxford Keep Our NHS Public, around 20 people occupied the main meeting room.

They put up banners in the windows calling on Andrew Lansley to scrap his Health and Social Care Bill. The occupation received support from local trade unionists, and further demonstrations are planned.

A nurse in the occupation told Socialist Worker, “We chose this building because it’s where the commissioning body is based.

“They are the people who will control the purse strings if the bill goes through and removes the government’s responsibility to provide universal healthcare.”

Over 300 people met in Leicester last Saturday to defend the NHS. The meeting was organised by NHS Alert, Campaign Against NHS Privatisation and Keep Our NHS Public.

John Ashworth, Labour MP for Leicester South, spoke from the platform, and denounced the Lib Dems for shamefully enabling the Tory attacks.

John Lister from Keep Our NHS Public spoke of the ideologically-driven lies that the privatised US system is more efficient.

GPs and health workers outlined the dangers posed by Lansley’s plans. Clinical Commissioning Groups will behave like insurance companies, so it will cost more for patients with higher risks.

But as one GP put it, health policy can’t be decided “like selling a car insurance policy to a 17 year old boy racer”. It is literally a case of life and death—far more important than profits.

Camden Keep Our NHS Public has called a lobby of local NHS managers at their board meeting next Thursday. The protest was called by a meeting of 100 activists over the planned closure of the Camden Road surgery.

The Practice Plc, which runs the surgery, and NHS management say they have no money to set up in alternative premises.

Camden Keep Our NHS Public is determined to fight this.

Activists hit the streets with leaflets and petitions. Campaigners visited primary schools and other public buildings to publicise the public meeting.

The meeting demanded that the council and NHS managers find an alternative for the axed surgery.

The fight for the NHS is far from over 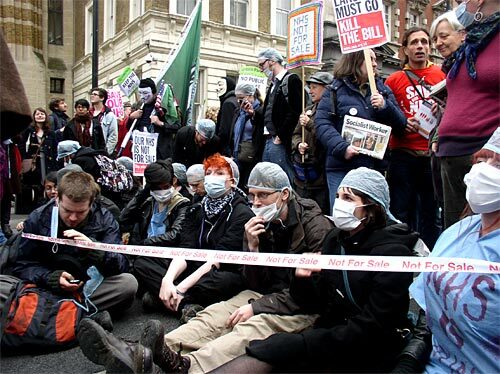 Health workers and supporters block roads against the bill