Heathrow Express: Digging in to fight for union rights

This article is over 18 years, 3 months old
'PEOPLE ARE prepared to dig in a bit. The gloves are off. We felt good about what we were doing. We felt like we had some control over our lives.'
By Kate Coyne
Downloading PDF. Please wait...
Saturday 11 October 2003

‘PEOPLE ARE prepared to dig in a bit. The gloves are off. We felt good about what we were doing. We felt like we had some control over our lives.’

That is how one striking Heathrow Express worker described the mood on the picket line during the 24-hour stoppage on Friday of last week. Workers voted for strike action to get their bosses to recognise and negotiate with the Aslef union.

The Heathrow Express runs from London Paddington and, mile for mile, is probably the most expensive train service in the country.

But as one worker told Socialist Worker, ‘We don’t see any of the benefits of this at all.’

Heathrow Express staff work some of the longest hours among all the train operators-between 55 and 60 hours a week-and are paid some of the lowest rates. Around half the workforce are women.

Management deliberately recruit workers from non-unionised and poorly paid sectors. Heathrow Express is probably the only rail company where previous rail experience actually counts against you.

Although the workers successfully balloted for the Aslef union to represent them two and a half years ago, bosses have never fully recognised their decision.

‘You’d read one thing in the weekly brief, like when they brought in the midnight express train last year. A week later we were told about it,’ fumed one worker on the picket line.

One of the striking workers said, ‘A year ago we had less than 40 members. We realised the only way forward was with the union. We had so many people willing to join up that we didn’t have to try very hard.’

One worker explained, ‘Management put out a badly worded and confusing survey to find out what staff wanted. Half the workforce didn’t even fill it in.

‘They are now insisting on giving the staff association equal bargaining rights with Aslef so they will be able to veto and bog down Aslef.’

Workers from other train companies and the London Underground came to the picket line to show their solidarity.

The mainstream press reported that Heathrow Express ran a near normal service. But there was hardly any scabbing-managers were drafted in to run trains.

Heathrow Express only runs five trains at any one time so during a 24-hour strike seven manager drivers could run the service. But a longer strike could bring the line to a standstill as drivers have to take 12-hour rest breaks.

The Health and Safety Executive had to remove a manager from the Heathrow Express platform after safety concerns. One worker said, ‘When it comes to the real bread and butter of the job, they haven’t got a clue. They’re totally out of their depth.’

Two further 24-hour strikes were due to go ahead on Friday and Sunday.

How the NHS is being privatised by stealth 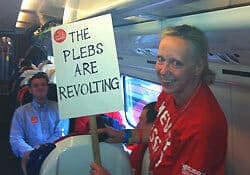