HIV on increase in Britain

HIV on increase in Britain

Deficiency of political will

MORE PEOPLE in Britain are becoming infected with the virus that causes AIDS than at any time since the disease was first discovered 20 years ago. The shocking news comes despite signs in recent years that the incidence of the HIV virus was coming under control in this country. And there is evidence that the virus is becoming resistant to drugs which, while not curing the disease, improve the life expectancy of people with it. There were 3,434 newly reported cases of HIV infection in Britain last year-the highest level since the disease was discovered. This is a 14 percent increase on the previous year.

For the second year in a row more heterosexuals were diagnosed than gay men. That ought to be enough to shatter the idea that AIDS is a disease only affecting gays. But that myth still persists. This points to the reasons why a disease which could be controlled is spreading.

Governments, including New Labour, have systematically failed to adequately fund campaigns to prevent the spread of HIV. They have also failed to present information in a way that will help people avoid getting it. HIV is spread mainly through sex. Stopping it means using a condom. Getting people to do that means open and honest discussion about sex. And that is precisely what governments in Britain have fought shy of over the last two decades.

The first government AIDS awareness adverts in Britain started to appear in March 1986. They did not even mention the word condom because Margaret Thatcher and top Tory ministers thought it was too explicit. The explosion of the disease in the US and pressure from health officials did gradually force the Tory government to approve a more effective campaign. Despite its limitations, there was a marked slowdown in the spread of the disease. Much of the credit for that goes to charities and campaigning groups. So by the beginning of 1999 there were 16,468 cases of AIDS in Britain. In France there were 50,112. It has a similar population, but the official response was even weaker.

The drugs companies’ response was chillingly calculated. They put money into research ten years ago, when they hoped for a quick breakthrough. Then the spread of the disease in Western Europe and the US slowed, so research funding fell.

The disease was spiralling out of control in sub-Saharan Africa and other poor regions. But of course people there could not afford anti-AIDS drugs Profiteering drugs companies are putting more money into research now as the disease again takes off in Western countries.

New Labour promised to break with the anti-sex moralising of the Tory party and tackle AIDS head-on in 1997. It said it would develop a national HIV strategy, which would coordinate prevention, care and treatment. It abandoned that pledge in June of last year, reducing official efforts to fight AIDS to a chapter in a wider policy on sexual health. That was more than a bureaucratic shuffling of paper.

It symbolised how the official campaign against AIDS has been downgraded so that it is now less visible and effective than it was ten years ago. The most right wing elements of the last New Labour government blocked effective measures.

Education secretary David Blunkett resisted government advisers who argued for more open discussion of safer sex in schools. Home secretary Jack Straw presented monogamous married life as the norm. He announced his intention in 1997 to make transmission of HIV a criminal offence. The government as a whole refused to confront papers such as the Daily Mail which campaign against spreading the safer sex message.

So it delayed announcing a new strategy on “sexual health” during the election. The result is that awareness among young people about AIDS is lower now than a decade ago.

Pregnancies among 15 to 20 year olds are rising, as is the incidence of gonorrhea and other sexually transmitted diseases. Both indicate less widespread use of condoms. Sections of the media have focused on the decline in condom use among young gay men.

But such articles have suggested that gays are deliberately risking getting HIV. There is no evidence at all of that. Those claims, however, serve to excuse the powers that be for failing to get the message across to all people-gay and straight. More straight people than gays are getting HIV, but gay men are still the biggest group in Britain who have it.

That means there is ample scope for the bigoted myth that no one else need worry. Similar bigotry is directed at another group hit hard by the disease-people who have recently arrived from countries where AIDS is prevalent. Charities and medical experts fear that the continuing scapegoating of asylum seekers will lead to media scare stories about people from Africa “bringing AIDS to Britain”.

The fundamental reason for the continuing spread of AIDS is more political than medical. It is due to the failure of governments to confront the prejudices in society that prevent people taking simple steps to stop the disease. 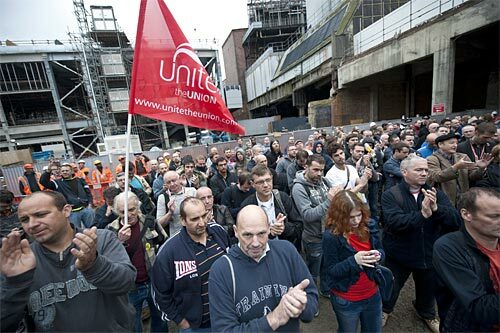 Construction workers say 'Unity is what will make the bosses listen'