Leon Greenman, a survivor of Auschwitz, spoke movingly about his suffering. The meeting was recorded on video for showing at all London fire stations.
TONY PHILLIPS

Nazi BNP member Steven Smith has been delivering leaflets to homes on Burnley’s Brunswick estate. Local residents reported how they had shouted at and chased off Smith.

Brighton and Hove Committee to Defend Asylum Seekers picketed Iceland in Hove on Holocaust Memorial Day two weeks ago over its involvement in the voucher scheme for asylum seekers.

We collected over 40 signatures in less than an hour.
BECKY SHTASEL 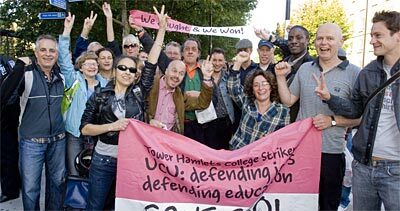 Nazi threat to Reverend and the Makers