This article is over 13 years, 1 months old
Campaigners against the closure of the Hoover factory in Merthyr Tydfil, South Wales, are gearing up for a protest meeting planned for Wednesday of next week.
By Siân Ruddick
Downloading PDF. Please wait...
Tuesday 02 December 2008

Campaigners against the closure of the Hoover factory in Merthyr Tydfil, South Wales, are gearing up for a protest meeting planned for Wednesday of next week.

Jonny, whose father has worked at the plant for more than 20 years, has been coordinating activities for the group.

He told Socialist Worker, “I set up a ‘Save the Hoover factory in Merthyr’, Facebook group on the night they announced the end of manufacturing there. By last week we had over 2,200 members.”

And it isn’t just online support either, says Jonny.

“We’ve collected hundreds of names on petitions and our planned meeting is really gathering support. This week we learned that our posters have gone up all over the plant, and that shop stewards have been encouraging workers to attend.

“I hope that this meeting could be the start of a really big campaign that saves the more than 300 jobs that are threatened.”

Elsewhere in Britain campaigners have started running stalls in town centres to encourage a fight against local job losses.

In Birmingham, where 850 workers at car firm Jaguar were recently made redundant, Socialist Worker sellers decided to turn their regular stall into a focus for all those affected.

Over the course of two hours lots of workers and their families came to the stall to express their anger at the way that managers have treated them.

Meanwhile, around 100 workers from the threatened Ford car factory in Southampton rallied outside their local town hall as union reps went to meet with council leaders.

The Unite union says that it is considering a national demonstration in the city early in the New Year.

Spirit of revolt sweeps across the campus 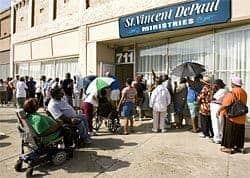