RECENT ARTICLES in the national media have talked about the violent nature of provincial towns across Britain. They named Newport in Wales as the worst. The occasional fight on a Friday or Saturday night pales compared with the violence wreaked on our communities over the last two decades.

The coal and steel industries have been obliterated. The jobs these provided were at the heart of stable working class communities. We have seen the destruction of skilled jobs, occasionally replaced by non-unionised, low paid work, where employers do everything possible to avoid paying the minimum wage.

That has contributed greatly to the loss of community feeling in the Valleys and to the more general need for a release at the weekend. It also goes a long way to explaining the increase in drug use in our areas. People have been left with no hope. They sometimes lash out at each other or at themselves. And all we get from New Labour are moralising lectures.

Compare this to the positive atmosphere at the recent Manic Street Preachers gig at the Millennium Stadium in Cardiff. Over 60,000 people partied New Year’s Eve away without trouble. The Manics give out a positive message of working class people compared to the media stereotype of us as thugs who just want to fight on the weekend. People of all ages responded to their political message with a feeling of hope and solidarity.

There is much in the history of the people of Newport and the Valleys to be proud of. There are the struggles of the Chartists and of the South Wales miners. It is that tradition that can draw people together. It can also encourage people to struggle to win the resources needed to bring the heart back into this area.

Rejoicing with cops in Brum at Xmas

POLICE IN Birmingham launched “Operation Rejoice”, supposedly to combat street crime in the city centre, over Christmas. It meant the police stopping, searching and videoing anyone they wished. Their leaflet said, “The video camera will record the features and clothing of certain groups and individuals.”

The “certain groups” turned out to be two young black lads waiting for a bus as I left work one night. The police searched them and filmed their faces. Myself and a passer by questioned why they were harassing these two lads, who did not even fit their description. They then turned their cameras on us.

End the misery of the 11-plus

I HOPED one of the first things Labour would do was get rid of the grammar schools and selective education in Trafford when they took over the council after years of Tory rule. This has not happened. Instead we have now got to go through a long process of campaigning for comprehensives and balloting parents.

My kids are at infant school. They are hoping the ballot to stop the 11-plus is successful before they have to take it. Their ten year old friends have been stressed out for two years preparing for the exam and taking it. Soon they will be split from their mates as some go to grammar schools and some to different high schools in the area.

Two thirds of Trafford children will be branded failures at 11. Passing the exam relates very closely to whether you live in a posh area. Selection leads to a worse education system even on the narrowest of measures. Far fewer pupils take A levels in Trafford compared to those in neighbouring comprehensive areas.

I AM a 27 year old man. I have been in and out of jobs since I was 16, mainly in the window trade. I have noticed that the system does not work properly in most departments. I feel under pressure all the time to do overtime because the money is needed if you want to run a car or go on holiday.

If you just live off the basic wage you can only just pay for your basic bills. There should be a fairer system. If people work basic hours they should be able to pay all their bills. The lack of money forces some people to take two jobs or work longer hours to cater for their family needs. It also makes stealing more appealing. I believe there are increases in crime for this reason.

If companies need to run 24 hours a day, there should be four shifts of six hours. There should be a basic 24 hour working week and a maximum of 30 hours including overtime. This could solve a lot of problems, like unemployment.

RICHARD Andrew (Socialist Worker, 8 January) is wrong about the policing of the N30 demonstration in central London last November. The background to the N30 protest was the Carnival Against Capitalism in the City of London last summer. That protest against the big banks was met by baton-wielding riot police.

The fat cats were livid that the protests were allowed to take place at all. So when it came to the N30 protests the police were determined there would not be a repeat. They can’t prevent such protests taking place. But they can provoke violence in an effort to damp down support for the protests. And they can then pretend that whatever force they use is entirely justified.

The right wing press tried to smear Reclaim the Streets, joint organisers of the N30 protest, as “violent anarchists” in the run up to the demonstration. All these lies were to prepare the ground for the police’s tactics on the night. When protesters attempted to march out of the concourse at Euston they were penned in by police. After some scuffles the Met’s Tactical Support Group-armed with helmets, shields and batons-attacked the crowd.

The riot cops did not care who they clobbered. One of their victims was reporter Danny Penman, whose right arm was broken in three places when he was clubbed repeatedly by police batons. Other journalists and photographers complained that they were stopped, searched and photographed by police despite showing their press credentials. The truth about the N30 protests is that the police provoked a confrontation.

Good reasons to kick him out

DOVER Express editor Nick Hudson was removed from his job shortly before Christmas. Readers may remember that in 1998 Hudson published an editorial which described refugees as “human filth”. He later had a complaint upheld against him by the Press Complaints Commission after he used an old picture from an inner city riot with a story about a police raid on a building housing refugees.

The papers he edited carried lies, half-truths and made up stories like these week in, week out. Protests to the publishers from community workers, the local MP and a petition organised by the churches were ignored.

So why was he removed? He made the mistake of publishing a story mildly critical of cross-Channel carrier Hoverspeed. This company is a big advertiser in the Dover Express. It seems an editor can publish material for months that encourages the Nazi National Front to march on the streets. But as soon as advertising revenues are touched, out he goes.

I COULD not help agreeing with the Tory Shaun Woodward who was sacked from his party over their support for the anti-gay law Section 28. As a teacher, I know that youngsters at my school use homophobic terms of abuse which do not help when anyone wants to discuss their feelings about being gay. A colleague and I recently organised a conference for sixth form students on prejudice and asked for a speaker from the Terrence Higgins Trust. The headteacher was worried that the speaker would talk about homophobia and that this would appear in the press. He “asked” us not to use the Terrence Higgins Trust but to concentrate on other forms of prejudice instead. It was a wasted opportunity, as I know there are gay students at my school who are afraid of coming out.

MANCHESTER Mardi Gras has been held over the last ten years to raise money for HIV charities in the city. It has always attracted large numbers of gay and straight people. Many thousands of people who attended last year were shocked that charities are no longer to get any money. That was despite the fact that people had to pay up to 10 for a pledge band to get into the fenced off “Gay Village” area. That put many people off going. It is disgraceful that this has happened to an event where gay and straight had fun together while funding vital work.

IT WAS encouraging to read the letter from Marina in Moscow opposing Russia’s war in Chechnya (Socialist Worker, 18 December). As Marina points out, the opposition of politicians Valeria Novodvorskaya and Michael Burovoy to the war is welcome. But both call for an extreme version of free market economics in Russia. Burovoy is a wealthy businessman. This helps explain why their anti-war protest on Red Square was so tiny. What is more, the Western regimes that liberals like Novodvorskaya and Burovoy look to launched carnage against Serbia last year. Anti-war campaigners in Russia need to offer ordinary Russians an alternative to both Stalinist dictatorship and market madness.

THE CAPITALISTS are getting richer and buying bigger cars which belch out more toxic fumes. Karl Marx said the means of production should be controlled by the many. But the few are destroying the many with pollution and greed. It is time to change the world for the better. 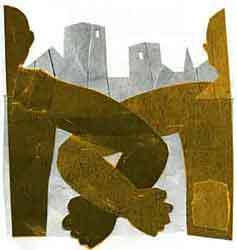 Tories plan to drive ordinary people out of 'expensive areas'