BRITAIN’S WORST floods in half a century brought the reality of global warming home to millions.

Across the world the impact has been even more severe, with devastating and deadly floods from Bangladesh to Vietnam in the last month. This weekend world leaders will gather in The Hague in the Netherlands for the latest international climate conference.

They do so as the world’s top climate scientists warn that global warming is occurring much faster than they had previously thought. But there is one certain fact about the Hague conference. The world’s biggest contributor to global warming, the US, which is responsible for a quarter of all global carbon dioxide emissions, will block any real action.

In 1992 at the Rio de Janeiro Earth Summit the US promised to hold its carbon dioxide emissions to the 1990 level by the year 2000.

It increased its emissions by 12 percent over the decade instead. At the 1997 Kyoto climate change conference the US said it would try to cut emissions to 7 percent below 1990 levels by 2012.

This proved too much for the fossil fuel corporations, the giant oil, car and rubber multinationals. They depend on people burning fossil fuels, or buying products like cars and tyres which depend on such fuels. So they exert enormous pressure on politicians that nothing should be done to hit their profits.

The result was that the US Senate voted in 1997 by 95 to zero to enshrine in law a refusal to ratify any climate change treaties at all.

The politicians who proposed this astonishing act, Senators Byrd and Hagel, pocketed over $150,000 each from the fossil fuel corporations. And since Kyoto US carbon dioxide emissions increased by over 1 percent a year on average-and last year hit a new high of a 1.3 percent increase.

European leaders claim they are more committed to tackling global warming than the US. Yet a report last week showed the EU rapidly increasing its carbon dioxide emissions.

The EU agreed at Kyoto that its member states would cut emissions by 8 percent from the 1990 levels by 2010.

Instead, says the report by the Dutch Ecofys and German Fraunhofer climate research institutes, EU emissions will actually increase by around 8 percent.

Britain’s John Prescott boasts that this country is leading the world on tackling climate change. He points to the fact that Britain is on course to surpass the 12.5 percent reduction it agreed at Kyoto.

That cut, says the government’s own Royal Commission on Environmental Pollution, is due to the shutting down of the coal industry. That shutdown, pushed through by the Tories for political not environmental reasons, saw a switch from coal to gas power stations. Gas stations pump out carbon dioxide, but less than coal.

The royal commission says a 60 percent emissions cut is needed if Britain, which is the world’s sixth biggest culprit on global warming, is to really tackle climate change.

THE PEOPLE most responsible for global warming are those at the head of the fossil fuel corporations.

These companies spent years denying that global warming was a threat and spent millions ensuring politicians bent to their will. Shell, Ford, BP, Texaco, General Motors and Daimler Chrysler were all part of the misnamed Global Climate Coalition.

In the run-up to the 1997 Kyoto conference this body gave $50 million each to the Democratic and Republican parties in the US to ensure whoever was in the White House blocked action on global warming.

When the coalition was accused of doing more than anyone else to prevent serious action on climate change, its spokesman, John Grasser of the US National Mining Association, said, “We regard this as an honour.”

Since Kyoto growing public awareness of global warming has pressed some of these corporations to undergo a “green” makeover. Many have quit the Global Climate Coalition and instead joined the Business Environmental Leadership Council, including Boeing, BP, DuPont and Enron.

They and other companies like Shell, Alcan and Pechiney have launched the Partnership for Climate Action. The company which has gone furthest in creating a new “green” image for itself is oil giant BP.

Now, it says, BP stands for “Beyond Petroleum,” and the new company logo is a green-fringed sunburst. In fact BP has recently become the world’s single biggest seller of petrol.

It is also committed to a 40 percent expansion of its oil and gas exploration programme. BP spent $7 million creating its new image and has set aside $100 million a year to develop it.

Yet BP admits that renewable clean energy like solar power is “such a minute part of our business that we don’t put a figure on it”. BP boss Sir John Browne has let slip the real purpose of the rebranding: “It’s all about increasing sales, increasing margins and reducing costs.”

Roy Gueterbock of Greenpeace is right to argue, “They spent more on the logo this year than they did on renewable energy last year. BP stands less for Beyond Petroleum and more for Burning the Planet.”

GLOBAL WARMING is a result of the growing quantity of “greenhouse gases” in the atmosphere. The main such gas is carbon dioxide. It traps the sun’s heat, like the glass in a greenhouse.

Burning fossil fuels, such as oil, coal and gas, is the main source of carbon dioxide. Over half the contribution to global warming is from power stations, and car and lorry exhausts.

So overwhelming is the evidence that global warming is occurring that even Margaret Thatcher accepted it. Amazingly some Tories today, such as John Redwood, still pretend there is nothing to worry about.

He rightly singled out the need to tackle the growing volume of road traffic. “Vehicles are, worldwide, the single fastest rising cause of carbon dioxide emissions,” he insisted. Yet he failed to propose any serious action.

Meacher sees cars and lorries as the only basis for transport. So he simply calls for cars to be built to run on cleaner fuels, such as ethanol and hydrogen fuel cells.

These technologies still produce carbon dioxide. And just changing vehicle fuel to a slightly less polluting one is a woeful response to climate change and the wider environmental damage from road traffic.

What is needed is a radical shift, putting billions into a major expansion of public transport. That could give people now forced to use cars the chance to use alternatives. It could also push freight off the roads and onto rail.

Instead, the government’s transport plan contains a 21 billion road building programme and assumes a 17 percent rise in traffic by 2010. A radical shift is also needed in energy production. Government reports point out that Britain could generate all its electricity from clean wind and wave power.

Yet the government’s renewable energy plans amount to at best 100 million. Why not instead take some of the 40 billion profits the top oil companies will make this year and put the money into developing clean publicly-owned, energy production and safe, reliable and affordable public transport?

GLOBAL WARMING means more extreme weather. This is because higher temperatures mean more water evaporates from the oceans, and so there is more rain.

Some people suggest that the effect of global warming could mean Britain slowly warms up, bringing a more pleasant climate here. This is misguided nonsense, as the floods should have underlined. The earth’s climate is a complex system in which small changes can lead to rapid and unpredictable large scale effects.

So one possible impact of global warming, for example, could be that Britain gets much colder if the warm Gulf Stream ocean current which now flows past our shores suddenly switches course. 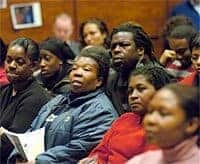