How can we get a decent pay fight on London buses?

This article is over 13 years, 9 months old
London bus workers are debating the strategy they need to win change. The issues are the same at every company – low pay, long hours, more stress, and attacks on pensions.
By Esme Choonara
Downloading PDF. Please wait...
Tuesday 18 March 2008

London bus workers are debating the strategy they need to win change. The issues are the same at every company – low pay, long hours, more stress, and attacks on pensions.

Many bus workers can’t even afford to live in the city that they drive in everyday.

The Unite union, which represents the majority of London’s 28,000 bus workers, has launched a campaign for a wage of £30,000 or 5 percent pay rise, whichever is higher, based on a 38-hour week.

This has been greeted with enthusiasm by many activists pleased to see a campaign bringing together bus workers from across London.

Some workers, however, haveraised questions about the union’s pay strategy.

There was an important strike at Metroline in December 2006 that won a 5.75 percent rise. The strike had a big impact – proving that strikes could win and involving rank and file union members.

In the year following the Metroline strike there were ballots at many companies. Strike action was called at a number of places over pay or pensions. But the strikes were either called off at the last minute or the talks allowed to drag into Christmas.

A Unite member at Travel London West told Socialist Worker, “We have to be willing to back up the claim with action if necessary. And we have tabled a series of dates that we want to meet with management so that the talks can’t just drag on. Bus workers across London are very powerful – we could bring the city to a standstill.”

But in some garages a growing frustration with the union has led some workers to leave Unite and join the RMT union. The RMT is not recognised for collective negotiations at London bus companies, but is able to represent individuals.

A driver at London United who has joined the RMT told Socialist Worker, “There is a lot of apathy among drivers. That’s not because people are happy – it’s because they think the union’s not relevant to them or they feel let down.

“My experience in Unite was that it made promises to keep members happy and then dumped the demands and forgot about them.

“There hasn’t been a proper fight over pensions or to defend holiday entitlement.

He is sceptical about the pay campaign. “Even where we have voted against a pay offer two or three times, it’s not been backed up by action.

“It’s good now to be in an RMT branch with tube workers – we have a lot in common. There are lots of battles to come – companies are so ruthless these days.”

Another bus driver who has joined the RMT added, “Having two unions is not a good thing. It would be better to have one union on the buses in London. But many of us feel we were getting nowhere.

“We are fuming. After the strike at Metroline, we hoped for some change but nothing happened.

“There are a lot of important issues on the buses at the moment – the stress, long hours, low pay. But lots of garages still have no union meetings at all. Drivers have nowhere to express their views. We decided instead to join the RMT.”

The key question for conditions on the buses is the confidence union members can gain by being organised and getting the union to fight.

As a driver at Arriva North told Socialist Worker, “I understand why people are frustrated with the union. It has backed off from action too many times.

“And there are some reps who are too settled or too close to management. But it varies from garage to garage. Unite is the biggest union on the London buses and we have to fight to make it our union. Sometimes that’s hard – but there’s no shortcut.” 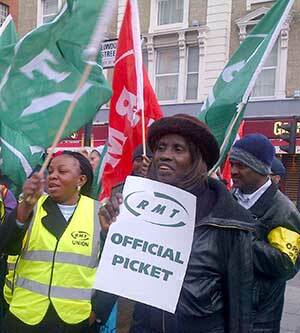