How Labour tried to outlaw strikes

How Labour tried to outlaw strikes

THE FORMER Labour prime minister James Callaghan had a warning for Tony Blair this week. He advised that Blair had better build wider support for when the going gets tougher. Callaghan perhaps remembers his own experience as leader in the 1970s and as home secretary in the 1960s. Secret cabinet papers from 1969, released this week under the 30 year rule, give a fascinating insight into the “Old Labour” government led by Harold Wilson, of which Callaghan was a part.

Five years after Labour had been elected, the cabinet was discussing strikes at almost every meeting and feared workers’ reactions to its policies. In response, before Tory Margaret Thatcher assaulted the unions, Wilson’s government tried to push through its own anti-union legislation.

In January 1969 Barbara Castle, the Labour Secretary of State for Employment and Productivity, published her white paper, “In Place of Strife”. Today Barbara Castle has won a reputation as a critic of New Labour, particularly over pensions. But in government in 1969, committed to reform from above and “helping British business”, she fronted an outright attempt to curb workers’ right to strike. The government proposed fines on trade unions which refused to hold strike ballots or agree to a 28 day “cooling off” period before strikes.

At first the government thought it could push through the proposals without a fight from union leaders. A letter to Harold Wilson reports on a meeting with TUC leader Vic Feather: “Feather insists there is no belly for a fight. He says that people who say there must be no legislation at any price are just a few of the romantics.”

But despite the inaction of union leaders, rank and file struggle against “In Place of Strife” threw the government into a panic. On 27 February 45,000 workers on Clydeside and 50,000 workers in Liverpool struck against the white paper. It was the first openly political strike since the 1926 General Strike. On 1 May over half a million workers struck against the proposals. Workers halted the production of all national newspapers.

A memo written by Harold Wilson about a secret meeting between Wilson and Hugh Scanlon, leader of the engineers’ union, and Jack Jones, general secretary of the TGWU, reveals the extent of the government’s panic. Wilson wrote that Scanlon was “full of dire warnings about what would happen in the factories if the government went ahead with its intended legislation. He implied that the kind of activists he had been talking to would see to it that a rash of strikes on May Day lines would be organised all over the country, and the government would be powerless to deal with them.”

Wilson said, “If the TUC hoped to crack their whip over trade union group members to vote against the government, it would clearly mean the TUC, a state within a state, was putting itself above the government in deciding what a government could and could not do.”

But although Scanlon and Jones were unhappy with “In Place of Strife”, Wilson overestimated their intention to mobilise direct action against the white paper. Hugh Scanlon, for example, had criticised the call for the May Day strike. He would later admit that he and Jack Jones “saw our destiny in collaboration, not confrontation”. Nevertheless, the pressure split the Labour Party and the cabinet down the middle. Even right wing home secretary James Callaghan argued that the proposals had pushed the parliamentary Labour Party and some ministers to “breaking point”. In a confidential annexe to cabinet minutes Wilson referred to Callaghan’s “disloyalty”.

At the end of May the government held talks in Italy with British union leaders. The details of the talks remain secret. In June the anti-union proposals were withdrawn when the TUC, including Jones and Scanlon, agreed to police unofficial strikes.

For Unionists in Ireland

THE LABOUR government sent British troops to Northern Ireland in August 1969. Many of the documents about Northern Ireland, which should have been released this week, were kept closed to the public. But the documents which have been made available show that the government was in a state of panic. It was critical of the Unionists and said it wanted to bring equal and civil rights to Catholics.

But above all the government wanted stability. This meant supporting the very sectarian institutions, like the RUC police force, which discriminated against Catholics. Yet in October 1968 Home Office officials had secretly warned the government, “There are legitimate grievances in Northern Ireland and it is entirely legitimate that they should be ventilated by demonstration. History demonstrates the failure of English intervention in Irish affairs.”

There was also some sprinkling of Trotskyists, who had contacts with like minded groups in London.”

Many new groups of workers joined the wave of resistance

WORKERS’ REVOLT did not stop with the end of “In Place of Strife”. The cabinet papers show a rising sense of panic in the government in the face of a rash of both official and unofficial disputes. These disputes were early waves of a rising tide of industrial militancy in Britain which lasted until 1974.

On 27 February the cabinet discussed what to do about an official strike of 40,000 workers at Ford. They were terrified action would spread if the strike won. Barbara Castle said, “The long term consequences of encouraging the company to give way to the militants’ demands could well be more damaging.”

Groups of workers who had never before shown militancy also began to revolt against Labour’s three year long wage freeze. On 30 July Barbara Castle reported to the cabinet, “The POEU postal workers’ union, who had been very cooperative in the past on productivity and other matters, were now in a militant mood.”

In September an unofficial strike by refuse workers in Hackney spread across London and to other parts of the country. On 26 October the cabinet discussed an unofficial strike at the Standard Triumph factory in Liverpool and the effect of the dust strikes. The cabinet minutes record, “In discussion general concern was expressed at the deteriorating condition of industrial relations. This was not confined to manufacturing industry or to the private sector. The success achieved by the dustmen in their recent unofficial action had been noted by many other sections of the community which had no history of militancy, including nurses, firemen, teachers and industrial workers in the civil service.”

PCS to ballot over job cuts at equality commission 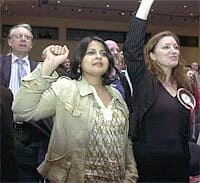 Time's up for New Labour in Scotland 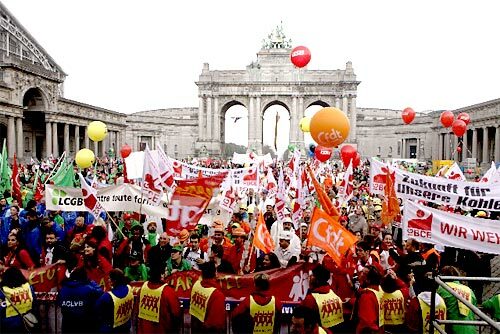 Photos of the European day of action against austerity, 29 September