How many will be sent to their deaths?

This article is over 17 years, 3 months old
TWENTY FIVE students and teachers from City and Islington College, north London, protested outside the home office on Tuesday of last week over the threatened deportation of student Abdul Turay.
By Neil Rogall
Downloading PDF. Please wait...
Saturday 19 February 2005

TWENTY FIVE students and teachers from City and Islington College, north London, protested outside the home office on Tuesday of last week over the threatened deportation of student Abdul Turay.

They handed in a petition of over 1,000 signatures calling for a halt to the deportation and for Abdul to be allowed to stay in the country.

Abdul is a 19 year old Muslim Mandinko from Liberia. At the age of seven he was kidnapped and forced to become a child solider. He was briefly rescued after three years by his mother but ended up in a prison camp because of his ethnic background.

As fellow inmates were taken away, never to return, Abdul managed to escape by bribing a guard.

Aged 17, traumatised by war and with psychiatric problems, he was dumped alone in this country. He has no idea if any of his family are still alive.

Liberia is now partitioned between three opposing factions. The British government advises its citizens not to go there. But the home office has decreed it is safe for a 19 year old with no known friends or family in Liberia to be sent back.

Abdul has studied for over a year at City and Islington College and hopes to go to university next year. He is highly popular and has won a student achievement award. In November he was detained for almost a month pending deportation.

The only reason he wasn’t bundled onto a plane to Liberia was that the British government could not obtain travel documents for him from the Liberian government.

When students and teachers at the college found out they launched a campaign to get him out of detention and to keep him in this country.

This has won widespread support. As Labour and the Tories outbid each other over bashing asylum seekers, how many people like Abdul are going to be sent home to their deaths? 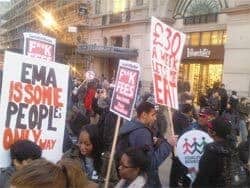