How police seized anti-war material in raid on Leeds bookshop

This article is over 16 years, 5 months old
On Friday 15 July police descended on the Iqra Learning Centre, an Islamic bookshop in Beeston, Leeds. They battered the door down and sealed the shop off, arresting one man who worked there under anti-terrorism laws.
By Anindya Bhattacharyya
Downloading PDF. Please wait...
Saturday 06 August 2005

On Friday 15 July police descended on the Iqra Learning Centre, an Islamic bookshop in Beeston, Leeds. They battered the door down and sealed the shop off, arresting one man who worked there under anti-terrorism laws.

The press was soon full of lurid stories about how the shop was a “unassuming front” used to “recruit youngsters and fill them with anti-West messages”. The Daily Mirror, citing unnamed “insiders”, declared that it was a “bookshop of hate”.

But Socialist Worker can reveal that these were all Islamophobic smears. Local people say Iqra is a respected community bookstore, that the “anti-Western” material seized by police was in fact anti-war literature, and that the suspected 7 July bombers have had no links to the shop for several years.

Mohammed Afzal works as a volunteer at Iqra. “They’ve raided a family bookshop, slap bang in the middle of Beeston, and taken anti-war material away,” he told Socialist Worker.

“The police are trying to make out that the material they took was ‘anti-Western’. But there’s nothing like that there. It’s things like Stop the War leaflets and DVDs of George Galloway at the US senate.”

Tanveer Akhtar works as community youth worker in the area. “The shop was there as a knowledge base — it sold books, but also had a library service, internet access, a creche, meeting rooms,” he says.

“It was open to the public and did activities in the community to promote understanding and community cohesion. They had good connections with Respect and the anti-war movement.

“There was a lot of anti-war information there — copies of Socialist Worker, books like John Pilger’s The New Rulers of the World, films like Michael Moore’s Fahrenheit 9/11. It was anti-Bush, not anti-Western.”

Mohammed adds, “There was a magazine with an article by John Pilger inside. It had that picture of the Palestinian boy up against the wall with his father, the one who was shot dead by Israeli soldiers moments later. The police were saying how they could ‘see how this could work someone up’.

“They’re now talking about laws against ‘indirect incitement’ of terrorism. Well that could be anything. If you criticise government policy, that’s it — you’re ‘working people up’.”

Locals believe the police raid on the bookshop was orchestrated for the media. “They had the key to the shop, but they used a battering ram to break down the door anyway and pulled the shutters off,” says Mohammed. “The media were there waiting for them — it was all done in front of the cameras.”

Tanveer said, “The police just chose to raid that shop as a publicity stunt. A guy from the bookshop was saying, here’s the key, take a look, it’s not a problem—but they refused. The police went in there and blew the doors off.”

He adds that media reports that the 7 July London bombers were linked to the shop are inaccurate. Mohammad Sidique Khan and Shehzad Tanweer had been volunteers at the shop, but had left in late 2001 around the time of the US attack on Afghanistan.

Tanveer said, “The boys became hardliners and left the shop. Since then they’ve never been back to the shop at all. They’ve had nothing to do with it for a number of years now.”

This was common knowledge in the area, he adds. But that didn’t stop the police from raiding the bookshop, sealing it off for days and pulling the shelving off the walls.

Since then police vans have been regularly touring the streets, videoing local people and increasing tension.

The bookshop volunteer arrested by police was taken to Paddington Green police station in London, some 200 miles away. He was quizzed for 13 days — then released without charge.

Muserat Sujawal is a community activist in Beeston. She says the bookshop raid is part of a climate of suspicion designed to browbeat Muslims into keeping quiet over their opposition to the government’s foreign policy.

She says, “If this bookshop is going to be targeted, where does it stop? If they can get away with this, what does it mean for other communites?”

“People are cautious and nervous — there’s a level of awareness of increased racism in general. But Muslims are a pawn in a bigger game here. We have to speak out and not let them get away with silencing our views.”

Lessons from attempt to turn Leeds university into a business 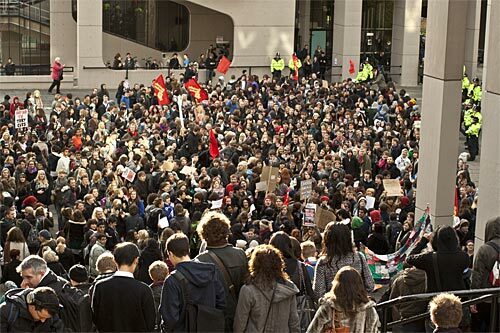 Iraq: an illegal war that led to terrorism