How Respect won in Bradford West

This article is over 9 years, 9 months old
George Galloway pulled off a spectacular political comeback on Thursday of last week by winning the Bradford West parliamentary by-election by a landslide.
By Anindya Bhattacharyya
Downloading PDF. Please wait...
Tuesday 03 April 2012

George Galloway pulled off a spectacular political comeback on Thursday of last week by winning the Bradford West parliamentary by-election by a landslide.

Galloway, standing for Respect, beat the Labour candidate Imran Hussain by 18,341 votes to 8,201. Galloway won 56 percent of the vote on a 50 percent turnout.

The Tories—who came second in Bradford West at the 2010 general election—were pushed into third place by anger at their budget for the rich. The Lib Dems lost their deposit.

A key factor behind Galloway’s win was anger at the Labour establishment in Bradford, which took voters for granted and delivered nothing.

Labour’s candidate Imran Hussain is deputy leader of Bradford council. Labour has pushed through £67 million in cuts in the city, slashing over 1,000 jobs.

Galloway supporters told Socialist Worker of their anger at how Bradford’s city bosses had presided over ten years of decay and mounting youth unemployment.

“I’m 21 and I’ve never had a job, although I’m always applying for them,” said Aqil Fiaz campaigning for Respect outside Girlington primary school.

“The jobs that are there are mostly in call centres in Leeds. A friend of mine works nights there and he has a law degree.”

Respect’s supporters were ecstatic at their victory. “It’s absolutely brilliant,” said Umit Yildiz, a lecturer at Bradford College who was involved in the campaign. “This was about young people breaking with tradition and voting for an anti-war and anti-cuts party.”

While there were specific factors in Bradford that propelled Galloway to victory, his win is a boost for the left in Britain. It underlines the potential for building grassroots opposition to Tory austerity.

Galloway was a Labour MP in Glasgow for 18 years until he was expelled for his opposition to the Iraq War. He won Bethnal Green & Bow for Respect in 2005, defeating pro-war Labour MP Oona King. But he failed to win the neighbouring seat of Poplar & Limehouse in 2010.

Wasab Khan, 24, is one of many volunteers who drove Respect’s victory. He spoke to Socialist Worker on polling day about the problems faced by young people in Bradford.

“They’ve got the money to pay all those police officers. But if they really wanted less crime they could spend that money on community centres.”

Wasab was stopped by the police last week while driving a Respect speaker car. The police searched the car, took him to the station and then released him.

“They were just wasting my time,” he shrugs.

Wasab says the media makes things worse by racialising the situation and presenting crime as an “Asian” or “Muslim” problem. These stereotypes don’t reflect the reality of living and working in Bradford, he adds.

“I work in a call centre. It’s very mixed race. We all want the same thing—it’s about dignity.”

He saw Galloway’s arrival in Bradford as a chance to shake up the city’s politics and address its longstanding problems.

“We’re lucky to have him here. I think he’ll make a difference. But we’ll see what changes he can make in three years.”

Shabana Bashir works in Bradford teaching English to speakers of other languages. She has been a Respect activist for a few years and stood in the 2010 local election.

“I got involved because we need change round here,” she told Socialist Worker. “Education is going downhill. Buildings are crumbling. Jobs are disappearing. I worry that my children are going to grow up in a different world.”

Arshad Ali was the Respect candidate in Bradford West at the 2010 general election and Galloway’s election agent for the by-election.

Galloway’s arrival in Bradford had crystallised a longstanding disaffection with Labour, he adds. “When I stood for Respect people would say, ‘We love what you stand for but we know you can’t win.’ The difference with Galloway is that we know he can win.

“Labour don’t know what’s hit them. There have been defections in droves. People are fed up with being told to vote on family lines rather than on principle.”

The key lessons of Bradford West 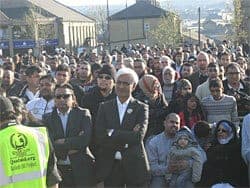 Busting the myths about why Galloway stormed to victory in Bradford 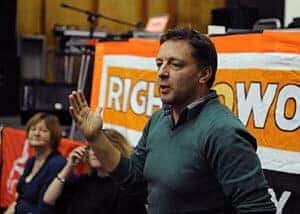